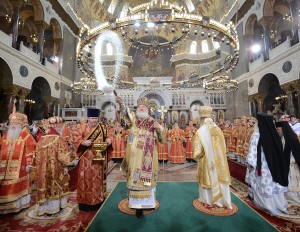 On May 28, 2013, His Beatitude Patriarch Theophilos III of Jerusalem and All Palestine and His Holiness Patriarch Kirill of Moscow and All Russia consecrated the Naval Cathedral of St Nicholas in Kronstadt after its extensive restoration and celebrated the Divine Liturgy in it.

In Anchor Square at the Cathedral, the heads of the two Churches were met by a solemn army forces formation including marines of the all four Fleets and the Caspian Flotilla with their battle standards. The two Patriarchs walked among the line of marines.

His Beatitude Theophilos and His Holiness Kirill celebrated the rite of the Great Consecration of the Naval Cathedral and the Divine Liturgy. They were assisted by a great assembly of clergy of the two Patriarchates.

Present at the service were Minister of Culture V. Medinsky, Commanders in Chief of the Pacific, Baltic and Black See Navies and Caspian Fleet, Mrs Svetlana Medvedeva in her capacity as chair of the Patrons’ Board of the program ‘Religious and Moral Culture of the Younger Generation’, as well as the parish activists, restorers, artists and constructors who participated in the revival of the Kronstadt shrine.

The service was broadcast by the St. Petersburg TV network and to the monitors installed inside the cathedral and in Anchor Square.

In greeting Patriarch Theophilos, Patriarch Kirill thanked him ‘for his selfless service of the Orthodox Church in the Holy City, his care for pilgrims coming to Palestine from Holy Russia, for his love of the Russian Church and the Russian people’.

Patriarch Kirill presented the cathedral with an icon of the Raising of the Lazarus and the trowel St. John of Kronstadt held when he laid the foundation stone of the Kronstadt Cathedral on September 1 (14), 1902. The benefactors presented the cathedral with a part of the relics of St Nicholas and chrism from Bari, parts of the relics of the twelve apostles and a part of the Lord’s Life-Giving Cross.

Patriarch Theophilos presented the cathedral with a pearl cross, saying in particular, ‘On behalf of our delegation and the Brotherhood of the Holy Sepulchre as well as the pious people and our flock living in Palestine, we would like to thank God and to express our amazement and admiration at today’s event as we have become not only partakers of the Body and Blood of our Lord Jesus Christ but also witnesses to the active living faith we could see in the Russian people. Therefore, seeing the magnificence of the faith we can rightfully and with every reason exclaim: Christ is Risen!’

Among those who addressed the congregation was also Mrs. Medvedeva.

Patriarch Kirill presented several benefactors and patrons with high church awards in recognition of their efforts for the restoration of the Naval Cathedral.

Then the two Primates came out to the western porch of the Cathedral. Patriarch Kirill addressed the military, locals and visitors to Kronstadt with a homily. Mr. A. Beglov read out a message of greetings from President Vladimir Putin. Among the speakers were also Mrs Medevedeva and Admiral Chirkov.

A military parade marched in the square. Participating in it were the Western Military Region’s guards of honour, students of the Navy Higher Special Officers’ Course, the parade crews of the four Navies, cadets of the Kronstadt and Nakhimov Naval Colleges, and other naval units.

Then the two Patriarchs participated in the opening of an exhibition of children’s drawings ‘Dedication to Kronstadt’ at the cathedral.

The celebrations were crowned with a festive concert and fireworks.

Most viewed articles
Patriarch Kirill: We In No Way Question the Healing Power of the Holy Mysteries of Christ!118
Hierarch from North Macedonia Gives Advice to the Ukrainian Orthodox Church114
Lessons from Saint Mary of Egypt107
On Feeling Forsaken105
Participating in God’s Vision101
Ethiopian Patriarch Thanks Patriarch Kirill For the Support During the Persecution93
Maronite Patriarch Thanks Russian Patriarch for His Support for Christians in the Middle East69
Representative of Russian Patriarch Delivers Rehabilitation Facilities to Children in Syria40
Sunday of the Samaritan Woman3
Food for the Journey1
Most popular authors
Pravmir.com team434
Justin Doty107
Archpriest John Moses (+2019)106
Priest Dustin Lyon101
Dcn. Michael Schlaack1