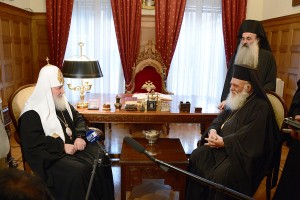 In the evening of 1 June 2013, His Holiness Patriarch Kirill of Moscow and All Russia met with His Beatitude Archbishop Hieronymos II of Athens and All Greece at the archbishop’s palace.

His Beatitude Hieronymos told his guest about the historical building in which sessions of the Holy Synod take place.

The Primate of the Russian Orthodox Church mentioned that he was here last time when meeting with Archbishop Christodoulos of the blessed memory and that he visited the archbishop’s palace at the time of Archbishop Seraphim and Archbishop Hieronymos I. “I have many recollections of this place as I accompanied Patriarch Pimen and Patriarch Alexy II,” he added.

Patriarch Kirill wished Archbishop Hieronymos God’s grace and help in guiding the Orthodox Church of Greece at this difficult time.

“They say that there are no easy times. This is true, indeed, as the Church on the earth is a militant church. She knows no tranquillity as she fights for the salvation of human souls, and this fight demands great efforts. We believe that under your guidance and with active involvement of the Holy Synod the Orthodox Church of Greece will cope with the problems you are facing today. I would like to tell you that the Russian Orthodox Church is always with you in prayers and deliberations,” His Holiness said.

Later, the Primates met with the members of the Holy Synod of the Orthodox Church of Greece. Archbishop Hieronymos greeted His Holiness on their behalf.

Patriarch Kirill noted that both Churches are interested in each other’s opinion on many different problems and added: “These fraternal and mutually enriching contacts are explained by the fact that both our Churches as churches of the majority in our countries have played a decisive role in preserving our nations and in shaping their statehood. Historically, they bear a great responsibility, hence our common goals.”

His Holiness Patriarch Kirill left the following entry in the distinguished visitors’ book: “We have begun our peace visit to the fraternal people of Greece with a cordial brotherly talk at the centre of the Orthodox Church of Greece. I wholeheartedly wish peace and prosperity to His Beatitude Archbishop Hieronymos of Athens, members of the Holy Synod and the plenitude of the Church of Greece. We will support each other in bearing our pastoral responsibility for spiritual life of our nations by common work and prayers.”

His Holiness read these words aloud and mentioned that he was ordained on June 1 forty-four years ago. Archbishop Hieronymos and all those present exclaimed Axios!