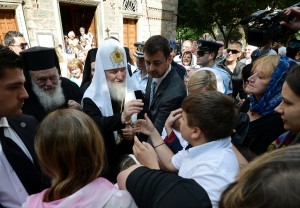 On 2 June 2013, His Holiness Patriarch Kirill of Moscow and All Russia and His Beatitude Archbishop Hieronymos II of Athens and All Greece visited the “Apostoli” (“Mission”) charity organization run by the Archbishopric of Athens. The Primates were accompanied by the members of the official delegation of the Russian Orthodox Church and by hierarchs of the Orthodox Church of Greece.

General director of the “Apostoli” International, Mr. Kostis Dimtsas warmly greeted the guests and said to Patriarch Kirill: Your presence here is another testimony of your love of human beings and the proof of your efforts exerted for the confirmation of the ideals of sacrificial love.

Mr. Dimtsas thanked His Holiness on behalf of the staff for the assistance rendered by the Russian Orthodox Church to the Greek people who had suffered from the economic crisis. Thanks to the Moscow Patriarchate, thousands of families could have meals every day. The general director informed the Patriarch that the “Apostoli” was in constant working contact with Metropolitan Hilarion of Volokolamsk, chairman of the DECR, and with Bishop Panteleimon of Orekhovo-Zuevo, chairman of the Synodal Department for church charity and social ministry. Mr. Dimtsas hopes that their cooperation will help the Greeks to cope with the difficulties caused by the economic crisis.

A short documentary about the “Apostoli” activities in different countries of the world was shown to the guests.

His Holiness the Patriarch thanked the organizers of the presentation and said that the Russian Orthodox Church placed special emphasis on church charity. He explained social activities in which the parishes of the Russian Church are engaged and expressed his hope for good and tangible results in charity work due to the implementation of joint projects of the two Churches.