Prime minister D. Medvedev and Patriarch Kirill chair a meeting of the Public Board of Guardians of St. Panteleimon’s monastery in Mount Athos

On January 24, 2014, the Public Board of Guardians of the Athonite Monastery of St. Panteleimon held a meeting. It was chaired Prime Minister Dmitry Medvedev and His Holiness Patriarch Kirill of Moscow and All Russia. 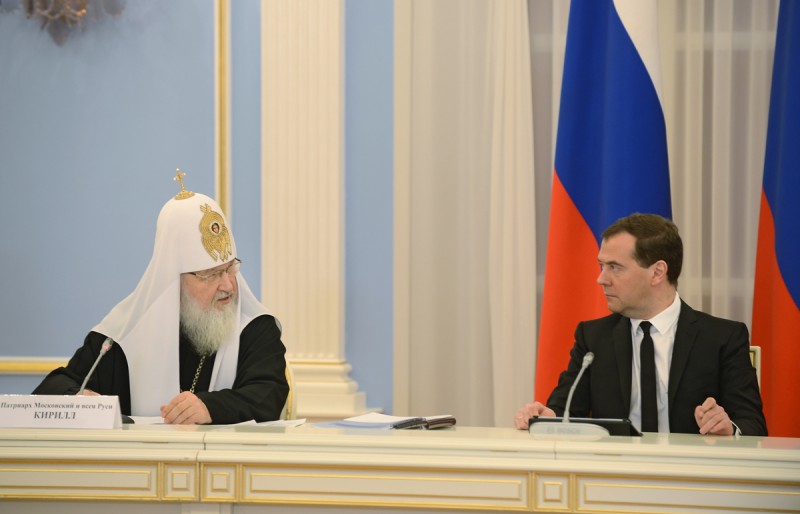 The leaders of the government and the Russian Orthodox Church in their capacity of co-chair of the Public Board informed the meeting about some results of the work of the Board, which was established in 2011, and presented the agenda of the meeting. Its task was to consider the work carried out by the International Foundation for the Restoration and Preservation of the Cultural and Spiritual Heritage of the monastery and to prepare events devoted to the millennium of the Russian presence on Mount Athos to be celebrated in 2016.

Mr. Medvedev clarified that the point is to restore a number of buildings, to build roads and to revive some other parts of the monastery. “Anyway, we plan to complete the primary general construction work this year and to carry out the whole complex of restoration work as planned to include the installation of up-to-date engineering infrastructure. We will also have to define a list of facilities to be restored by the millennium and the work to be continued after 2016”, he said.

As His Holiness Kirill said in his remarks, “to come in touch with shrines and to visit the monastery is of a great importance, really great spiritual importance for people today. And Russia has traditional millennium-long relations with Mount Athos. For this reason the Holy Mount is of a very great importance, the more so that Russian monks are present there in St. Panteleimon’s and other monasteries”. His Holiness expressed satisfaction with the progress of the restoration work. “A great amount of restoration work has been carried out on a very high level. I believe nothing like this, namely, serious scientific restoration, has ever happened on Athos, at least in our monastery”, he said. The property to be restored includes Xilourgou, Monastery of the Assumption of Our Lady, Old Rusik and some other monasteries.

Mr. A. Beglov, Presidential Envoy of Central Russia and executive secretary of the Pubic Board of Guardians, made a detailed report about the work of the Board.

The meeting was attended by Presidential assistants I. Levitin and I. Scheglov, Minister of Culture V. Medinsky, Minister M. Abyzov, St. Petersburg Governor G. Poltavchenko, Mr. A. Molchanov, chairman of the Foundation for the Preservation of St. Sergious of Radonezh’s Legacy board, Mr. V. Yakunin, chairman of the Board of Guardians of the St. Andrew Foundation, and other benefactors, officials, and representatives of pubic organizations.

Among the participants were also Archbishop Mark of Yegorievsk, head of the Patriarchal Office for Institutions Abroad, Archbishop Feognost, abbot of St. Sergius’s Laura of the Holy Trinity, and Hieromonk Makary (Makienko), spiritual father of St. Panteleimon’s Monastery.

With reference to the site of the Russian Federation Government