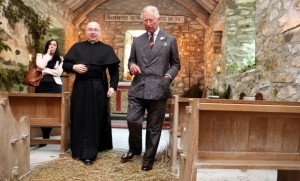 The Prince of Wales braved a heavy downpour to visit an ancient church in Gwynedd earlier this week.

He was accompanied by the Duchess of Cornwall for the visit to St Beuno’s Church, Pistyll, in the north-west of Wales.

The hospice church dates back to the 6th century and was frequented by pilgrims on their way to Bardsey Island, an important religious site in medieval times owing to the monastery built there by Saint Cadfan in the sixth century.

During the royal visit, the floor was covered with wild medicinal herbs and rushes as is tradition at the church during Christmas, Easter and the harvest festival Lammas.

The visit to the church was made as part of their summer tour of Wales.  The Prince and Duchess also made a visit to the set of BBC1’s Doctor Who show in Cardiff, where they met members of the cast and production team.

Prince Charles was to officially open the new headquarters of the Prince’s Trust Cymru in Cardiff.