Damascus, Syria (CNN) — An 80-foot-tall statue of Jesus Christ stands atop of a hill overlooking the Syrian Christian town of Saidnaya, about a 40-minute drive from Damascus. The statue is part of the ancient Cherubim Monastery in the Qalamoun Mountains, a quiet, spiritual place that’s very important to Syria’s Christians. 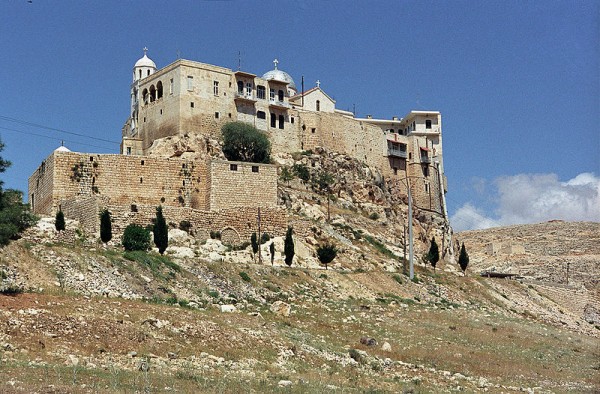 But these days, there is a gruesome sight at the feet of the statue of Christ the savior. About 30 mutilated and charred bodies lie in piles near a footpath that leads to the monastery. The dead are rebel fighters who tried to storm the monastery but were killed as they advanced, Syria’s government says.

The attack happened on January 19 and allegedly involved hundreds of rebel fighters. The regime says that in all, 60 militants were killed in the fighting.

“They came from another mountain a few miles away and destroyed our front gate,” says a pro-Christian fighter who supports Syrian President Bashar al-Assad and was involved in the battle for the mountaintop.

The Cherubim Monastery is not a civilian target these days. Dozens of pro-Assad fighters, mostly Christians, as well as regular Syrian army forces, are stationed there. The force has a tank, artillery pieces, mortars and light weapons at its disposal. Many of the Christians in Saidnaya say they are under threat from radical Islamists among rebel fighters battling the Assad regime.

“Times are awful,” one man told CNN on a visit to the monastery. “We always have to watch our backs and be ready for an attack. We always carry a gun and a grenade because we could be attacked at any moment.”

Christians are a minority in Syria. They make up about 10% of the population. But Christianity has a rich history here. Jesus was baptized in Syria, some of the earliest relics were found here, and the town of Ma’aloula, also in the Qalamoun Mountains, is one of the last places where the ancient Aramaic that Jesus spoke is still the main language.

But Ma’aloula was recently invaded by al Qaeda-linked militants of the Jabat al Nusra rebels. Nuns were kidnapped and have yet to be released. All this is stoking fears among Syria’s Christians that their existence in Syria might be under threat.

“I don’t just think so. I am sure they are targeting us because we are Christians … and we have had many attacks,” one fighter at the Cherubim Monastery told CNN.

Many of Syria’s Christians support the Assad regime, fearing that the end of the current government could lead to instability and an Islamist power grab. In Saidnaya, Christian fighters work closely with the Syrian military, and the opposition accuses them of shelling rebel-held towns in the Qalamoun Mountains from the Cherubim Monastery.

Christian leaders in Syria say they are not taking sides in the conflict, but just protecting themselves, their towns and neighborhoods while the opposition has done little to assure them that Christianity would have a place in Syria if the Assad regime were to fall.