Protection of the Holy Virgin

On October 14th (the 1st, old style) the Russian Church triumphantly and joyously celebrates the Protection of the Holy Virgin. This holiday is beloved by the Russian Orthodox people. It was established in the 12th century by the Russian Church, although the historical basis for it was the defeat of our Russian forebears as they attacked the capital of Byzantium, Constantinople, which was saved through the intercession of the Theotokos.
admin | 13 October 2008

On October 14th (the 1st, old style) the Russian Church triumphantly and joyously celebrates the Protection of the Holy Virgin. This holiday is beloved by the Russian Orthodox people. It was established in the 12th century by the Russian Church, although the historical basis for it was the defeat of our Russian forebears as they attacked the capital of Byzantium, Constantinople, which was saved through the intercession of the Theotokos. 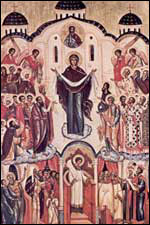 The Russian Church celebrates an event which occurred in ancient times and in a foreign land – the faraway Greek city of Constantinople, more than 1000 years ago. The event took place in the Vlakherna church, in the presence of a multitude of people, although it was seen only by two – the blessed fool-for-Christ Andrew and his disciple Epiphanius. Both of them saw the Queen of heaven and earth appear in the church, praying for the world and all the people, and blessing the faithful with her most-holy covering.

Who was this blessed Andrew, the chosen one, to whom the Mother of God revealed Her appearance? In the great city of Constantinople St. Andrew seemed to be poor and base-born. However, under the cover of oddity he concealed from everyone his shining spirit and his gracefilled wisdom. St. Andrew was a Slav by birth and as a child was sold into slavery.

Beloved by his master, he received an excellent education and showed particular aptitude for reading and writing; as a result he was given the honorable position of scribe. However, his innate wisdom impelled him to shun earthly honors and immerse himself in spiritual contemplation. Following his inner impulse, he left the world under the guise of madness, concealing his great spiritual gifts under beggar’s rags, and took upon himself the spiritual feat of foolishness-for-Christ, along with the labors of fasting, poverty, homelessness and constant prayer. It was this fool-for-Christ whom the Mother of God chose to witness Her coming to the Vlakherna church. She chose neither the patriarch, nor a bishop, nor a clergyman or monastic; She chose neither the king or his nobles, nor any of the wise and learned men for whom Byzantium was famous; nor did She choose any of the city’s prominent citizens. Instead, the Holy Theotokos chose the fool-for-Christ Andrew, and granted him the grace of witnessing, together with his pious disciple Epiphanios, the great and awesome vision.

This happened at the end of blessed Andrew’s life. While attending an all-night vigil at Vlakherna, in the early hours of the morning he saw the Mother of God enter the church through the royal doors, surrounded by a host of angels and a multitude of saints, supported by Saint John the Baptist and the holy apostle John the Theologian.

As the Theotokos approached the ambo, Saint Andrew asked Epiphanios: “Do you see the Mistress and Queen of the world?” To which the latter tremblingly replied: “I see, father, and I am awed.”

After praying for a while, the Most-pure took off Her head covering, which glittered like lightning, and spread it over the people.

In celebrating this feast, the Church commemorates the great and joyous revelation of the divine protection which is spread over the world, the Mother of God’s great love for mankind. For not only in the Vlakherna church did the Theotokos tearfully pray a thousand years ago, but She prays for us always until the end of time. And Her venerable covering was spread not only over the faithful who were present in church at that time, but over the entire world, over all of mankind, and over all of us, sinners, shines the saving Protection of the Mother of God.

The Mother of God is a mediator between earth and heaven, an Intercessor for the world before the throne of God’s glory. The world has not been abandoned in its sorrow, man is not alone in his grief: for us, and together with us, grieves the Holy Virgin. Yes, we know that we are great sinners, but we also know that we have not been forgotten by the Mother of God, to Whom each human soul is precious. Can there be any greater comfort? Throughout the ages the joy of the Holy Virgin’s Protection shines in the hearts of the faithful, the joy of Her prayer for the world. The Theotokos’ prayer, with which the Holy Spirit Himself prays, is all-powerful. May the joy and the glory of the Mother of God’s Protection shine over us, within our hearts and over our land! Amen.

From “Miraculous Icons of the Mother of God in Russian History”