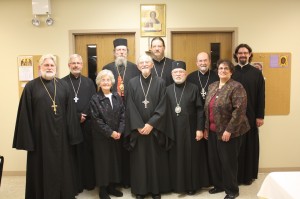 The event, which was sponsored by Saint Vladimir’s Seminary Alumni Association and hosted by the parish community at the cathedral, began with a Service of Thanksgiving celebrated by Archpriest Michael Senyo, Cathedral Dean, with choir responses led by Archpriest Thomas Soroka, rector of Saint Nicholas Church, McKees Rocks, PA.

Archpriest Dr. Chad Hatfield, Chancellor/CEO of Saint Vladimir’s, as Master of Ceremonies for the event, made two significant announcements.  First, the “Father Thomas Hopko Scholarship Fund,” which provides seminary scholarship aid for sons and daughters of priests, was recently fully funded with $100,000.00 in total donations; and second, a faculty-staff duplex on the seminary campus will henceforth be known as “The Hopko House.”

Other notable participants in the celebration included His Grace, Bishop Melchisedek of Pittsburgh and Western Pennsylvania; His Beatitude, Metropolitan Theodosius, former Archbishop of Washington and Metropolitan of All America and Canada; Archpriest Dr. John Jillions, Chancellor of the Orthodox Church in America; Archpriest Dr. John Behr, Dean of Saint Vladimir’s; Catherine Hopko Mandell, daughter of Father Thomas and Matushka Anne; and members of the Orthodox Monastery of the Transfiguration, Ellwood City, PA, where Father Thomas and Matushka Anne often attend services.  Father Soroka made a presentation of an icon of Christ on behalf of Ancient Faith Radio, a media outlet for which Father Hopko has been featured in over 300 podcasts.

Father Thomas served as Dean of Saint Vladimir’s Seminary from 1992 until 2002, and retired with the distinction Dean Emeritus.  From 1968 through 2002, he taught courses in Dogmatic Theology, Practical Theology, Homiletics, and Spirituality at the seminary.  He served as pastor of churches in Warren, Ohio (1963–68), Wappingers Falls, NY (1968-1978), and Jamaica Estates, NY (1978–1983).  In 1963, he married the former Anne Schmemann.  They have five married children (a son and four daughters), 16 grandchildren, and one great-grandchild.  They now live in Ellwood City, Pennsylvania.