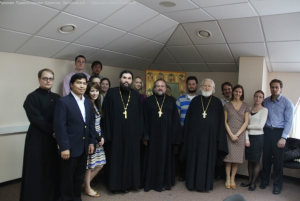 On May 23, 2013, a youth choir comprised of young singers from the parishes of the Russian Orthodox Church Outside of Russia visited St Tikhon Orthodox Humanitarian University in Moscow, accompanied by Protopriest Andrei Sommer, Vice President of ROCOR’s Synodal Youth Department.

Protopriest Vladimir Vorobiev, Rector of the University, welcomed the visitors: “Fr Andrei Sommer and I have known each other for a long time, and this is not the first time he is bringing an Orthodox youth group from America. Our relationship enriches both of us. In any case, it gives us a better means of understanding the history of the Church of the 20th century, but most of all to pray together.”

Fr Andrei thanked Fr Vladimir for his hospitality and talked about the way the combined youth choir originated: “We are very happy that you receive us like your own kin. This time I am leading a special youth group—a choir consisting of singers from various parishes in from the furthest corners of the American continent. These young people are here with the blessing of His Holiness Patriarch Kirill of Moscow and All Russia and His Eminence Metropolitan Hilarion of Eastern America and New York in order to mark the 400th anniversary of the Romanov Dynasty. Our choir is giving concerts but also singing at divine services, but most importantly they are meeting their counterparts in Russia. Some singers are making their first trip to Russia, others have been here before, some speak Russian fluently, others barely speak a word, but all of them have the same sense of duty to perform Church Slavonic liturgical music.

Protopriest Georgy Orekhanov, Prorector of StTOHU, discussed the visitors’ program during their trip, and preparation with the school’s student choir for the Sunday service, the concert in StTOHU’s concert hall and logistical details. The singers from abroad eagerly took up the university students’ proposal of holding a meeting exclusively in English.

At the end of the meeting, the visiting choir singers performed several pieces they would sing at all-night vigil at Epiphany Cathedral in Elokhov, Moscow.