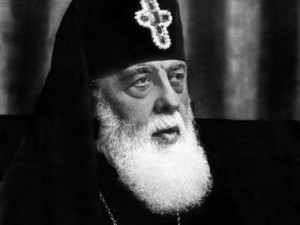 Putin says in the message, posted on the Russian President’s website on January 11, that Patriarch Ilia II’s leadership of the Georgian Orthodox Church is “exemplary” and his contribution to strengthening of Orthodoxy in Georgia “invaluable.”

“We highly appreciate your warm relations with Russia and the Russian Orthodox Church. Your personal efforts, your calls for peace, love, creativity, accord and unity have largely contributed to maintaining multi-century ties of friendship and mutual understanding between our peoples during difficult stages of history,” the message reads.

“I am sure that fruitful spiritual, cultural, humanitarian dialogue will become a reliable foundation for further development of relations between Russia and Georgia,” Putin says.

Mikhail Shvydkoy, the Russian President’s special envoy for international cultural relations, conveyed Putin’s congratulations during a conference in Tbilisi-based Patriarchate’s university on January 11. Shvydkoy also visitedGeorgia in December, 2008 on the occasion of 31st anniversary of the Georgian Patriarch’s enthronement.

Patriarch Ilia II, who turned 80 on January 4, plans to visit Moscow in less than two weeks to receive an award from Russian Orthodox Church’s International Foundation for the Unity of Orthodox Christian Nations (IFUOCN).

IFUOCN grants award annually to political and religious leaders, as well as public figures for contribution to “strengthening unity of the Orthodox Christian nations.” Awarding ceremonies are held in Moscow’s Christ the Saviour Cathedral.