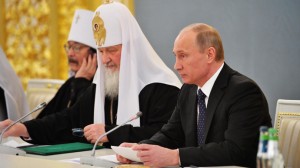 The rights of religious minorities, including Christians, are being infringed all over the planet and humanity must take measures to stop such instances, Vladimir Putin said at the meeting with Orthodox Christian leaders in Moscow.

“In many of the World’s regions, especially in the Middle East and in North Africa inter-confessional tensions are mounting and the rights of religious minorities are infringed, including Christians and Orthodox Christians,” the Russian President noted, adding that such conflicts could lead to the most serious consequences.

Putin called for immediate measures to prevent such situations.

He added that Russia has tremendous experience in reaching and maintaining inter-confessional peace and accord, and is ready to share it.

The head of the Russian Orthodox Church Patriarch Kirill said at the same meeting that the attempts to push Christians out of Syria would lead to a “civilization catastrophe”. The patriarch noted that Syria was the birthplace of Christianity and the fact that believers get killed and purged in the course of the military conflict was a tragedy for Orthodox Churches, international culture and for everyday people.

Putin was meeting the heads of the delegations from all 15 Orthodox Churches who arrived in Moscow to take part in the celebrations dedicated to the 1,025th anniversary of the “Baptism of Russia” – the official adoption of Christianity in Kievan Rus by Prince Vladimir in 988AD.

The 15 Orthodox Churches jointly unite over 225 million of believers.