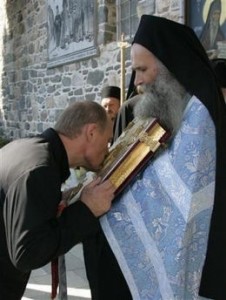 Russian President Vladimir Putin’s first stop in Greece will be Mount Athos, then the island of Apocalypse, Patmos and finally the Byzantine city of Peloponnese, Mystras.

Patmos has already started the preparations to welcome him in Mid-August. He decided to visit the blessed island of the Dodecanese to make a pilgrimage to the sacred and loyal of Orthodoxy at the Monastery of Saint John the Theologian.

This pilgrimage is of particular importance, as the monastery constitutes a benchmark, a cultural and religious center, for the entire Christian world.

Putin will walk on the ground of the cave, where Jesus’ beloved disciple had the divine vision, after which he wrote the Revelation. The monks will give him a tour of the cave known as Jerusalem of the Mediterranean and then they will show him all the sacred relics and the manuscripts kept for centuries.

“Vladimir Putin’s visit will be the second visit of a head of state, after the U.S. President George Bush, who had visited Patmos in 2008 with his wife Barbara.” stated the Deputy Mayor of Patmos Ioannis Simantiris.