Putting on the Armor of God: Being a Warrior When it’s Popular to Be a Weaner

Source: St. Lawrence Orthodox Church
Being a warrior for Christ has no minimum age or athletic qualifications. All warriors for Christ, however, must want to “be men” or “be manly”. It means to be what a human is really meant to be: brave, courageous, and authentic in obedience to God.
Archpriest Thaddaeus Hardenbrook | 08 November 2014 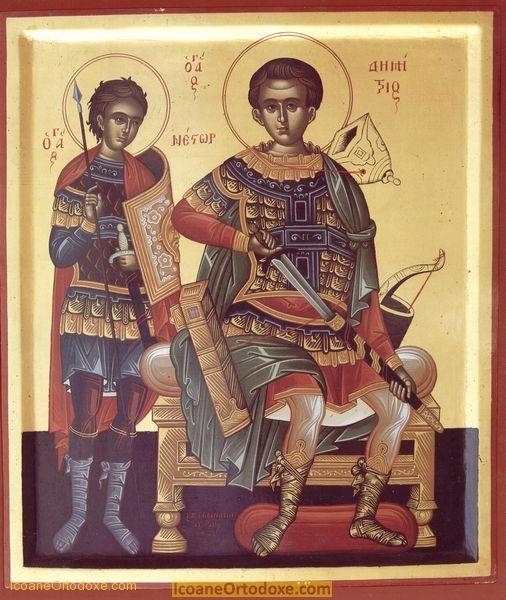 Saint Nestor was only a teenager when he decided he’d had enough of the local Christians being slaughtered in forced combat against a giant named Lyaeus. The Emperor Maximian had set up a raised platform in the center of Thessaloniki where he forced Christians to fight for their lives against the seemingly unconquerable Vandal mercenary “who was a beast in both appearance and character.”

Nestor was thin and not very tall, but apparently that did not concern him. He visited Saint Demetrios in prison and took his blessing to challenge Lyaeus. The saint made the sign of the cross over his head and heart, prophesying, “You will both be victorious and suffer for Christ.”

Nestor entered the city center and approached the combat platform. Around the platform were numerous spears set into the ground. Lyaeus had made a name for himself by hurling his defeated victims down onto the spears.

So young and slight of build was Nestor that both the emperor and the Vandal hesitated to accept his challenge. But when he explained he would be victorious by the power of Christ, both men longed to see him dead. Mounting the platform, Nestor cried out, “O God of Demetrios, help me!”

Lyaeus charged at him from across the platform, and wonder of wonders, Nestor engaged him, deftly steered his momentum, and threw him from the platform onto the very spears that had killed so many Christians. The crowd exploded spontaneously, “Great is the God of Demetrios!”

Soon afterwards, both Saints Demetrios and Nestor were put to death for their faith. Yet clearly they were not “afraid of those who kill the body, and after that have no more that they can do” (Lk. 12:4). They had “put on the full armor of God” (Eph. 6:11). They stood, girded their waists with truth, put on the breastplate of righteousness, shod their feet with the readiness of the gospel of peace, and took up the shield of faith, the helmet of salvation, and the sword of the Spirit. They were warriors of Christ and victors to the end.

Being a warrior for Christ has no minimum age or athletic qualifications; the child-martyr Kyriacos was only three years old, but that’s another story. All warriors for Christ, however, must want to “be men” or “be manly” (1 Cor. 16:13). This doesn’t mean to be masculine (the term “manly” is used to describe female saints as often as male); it means to be what a human is really meant to be: brave, courageous, and authentic in obedience to God.

When we are little, obedience to our parents teaches us how to obey. As “men,” adults, we put that ability into action in our relationship with God. Obeying God is manly; it’s what authentically mature humans do. And that obedience leads us to a courageous and brave Christian existence. It leads us on the way of being warriors for the heavenly kingdom, where we vanquish, by the power of Christ, “principalities, powers, the rulers of the darkness of this age, and spiritual hosts of wickedness in the heavenly places.” Spiritual battle is the life, and the identity, of the Christian warrior, the grown-up Christian.

When I was a kid, my grandfather once took me to look over a bunch of young calves on the ranch next to his. They were in a large corral, newly separated from their mothers, mooing mournfully, and clearly unhappy with the new arrangement. Some fretted their loss, some lashed out angrily at their neighbors, while others just found a corner to mope in. “All of them just got finished being weaned from their mothers; that’s why we call ’em weaners. It’s time for them to grow up whether they want to or not. It’s just the way life is.”

He laughed aloud as he surveyed the self-pitying critters. “Take a good look at them, the way they’re all acting as if life’s too tough.” Then he turned to me with a little “get-ready-for-some-words-of-wisdom” in his eyes. “You can be a lot of things in life, but don’t be a weaner.”

Through the prayers of the holy warriors Demetrios and Nestor!

Getting an Early Start on a Late Pascha

“Walk circumspectly . . . redeeming the time” (Eph. 5:15) The devil called a meeting of the demonic…

The Great Banquet of Christ’s Birth

For Orthodox Christians, life is the experience of entering ever more deeply into the many and eternal banquets…

In the name of the Father and of the Son and of the Holy Spirit. Amen. Happy Saint…