Things just take time. That’s perhaps something that people don’t always understand. It takes a long time even to begin to become Orthodox, especially if you’re coming from a spiritual and cultural background which is not traditionally Orthodox. This is because there are things that are passed down organically from generation to generation. But of course that’s not the case when people come from a Western background, or for that matter from the countries of the former Soviet bloc, where the transmission of Orthodox culture was seriously impaired by decades of persecution.
| 17 November 2009 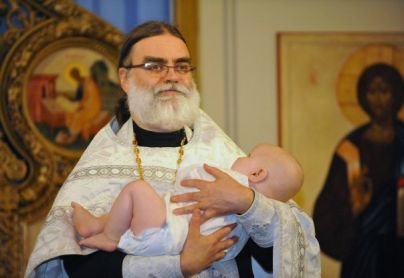 Q.:  Fr. Joseph, what could you tell us about, from your experience, how to deal with converts who come to an Orthodox church and encounter unpleasant situations, or things they don’t like?

Fr. Joseph: In general, I think whenever anyone comes and makes some move in the direction of the Church more often than not there is some kind of opposition in spiritual terms. I observed that in my own experience and in dealing with people. If somebody came to me and said I don’t want to see this, that or the other, I would probably try and get them to understand things in that kind of frame of reference.  I think this is case of distinguishing–this is an important point–between the Church as such and the people who belong to the Church, people who go to church; these are not the same thing.

And it works both ways, of course, because one can find a welcoming community of nice people, who are friendly, but not Orthodox in the full sense.  They may be more or less far from Orthodoxy. It’s a mistake to identify people and the faith too strictly. Of course it shouldn’t be that way and Christians should practice what they preach. It is important to understand that we are all sinners and the Church is a community of repenting sinners. Sometimes there is even a danger when you have a very charismatic personality who, even if the content of preaching is Orthodox, can somehow obscure the message, for some people at least. In that context, I always find a profound significance in the moment in the Vigil service when the deacon comes out and holds the gospel book aloft for the people to see.  You can’t see him, all you can see is the Gospel, all you can see is Christ. And that is an image of how we should be.

–  Would you have any examples from your experience of converts who initially were attracted to the Orthodox Church but found something in it that turned them away or became an obstacle?

– Well, the one that’s closest to home, it’s a very unfortunate, sad experience – occurred in our church in London a couple of years ago. It’s a complicated story, but the essence of it, as I see it, relates to the fact that the make-up of our church changed enormously over the last fifteen-twenty years with the influx of  people from Russia and the former Soviet Union.  Yes, Orthodox and yet not Orthodox in quite the same way as us.  They were people from traditionally Orthodox countries, but there were quite big cultural differences and our church community changed from being relatively small, relatively homogenous, with a high proportion of converts, to something much larger, much more mixed, and unfortunately it did lead to a very serious problem.

– Yes, that sounds like a much more complicated situation than what I was imagining, for a convert coming into something like that.  How would you try to make an English-speaking convert try to fit into a community like that, that’s already so divided?

– Well, this is the situation that we’re facing right now. Now that the dust has settled, and those who felt unable to remain have left,  we are in the position of being a community with a very strong Slavic element, mostly Russian and Ukrainian and some others, but we’re trying very hard to keep our openness to, well, everyone.  And so far it seems to be working.  So, for example, we’ve kept our tradition of having all of our services bilingual, in Church Slavonic and English.  Our Russian priests are all English-speaking, albeit in varying degrees.  I myself am not Russian at all, I’m British – although I do speak Russian to a certain extent.  And we are beginning to see, not a flood, but a fairly steady trickle of non-Russian people expressing interest in joining the community.  Often they’re English men who are married or engaged to Russian or Ukrainian women.  And, to be honest, the cultural differences don’t seem to be a huge problem for them.

– A lot, you see, goes beyond culture and language.  It goes really to the heart, whether our hearts are open to somebody who is different in some way from ourselves, from our own cultural background.  That’s what it amounts to, really.

– I was going to mention that we have quite a few converts coming from Protestant or Evangelical circles and they’re very zealous and they want to preach Orthodoxy immediately after converting.  And they get kind of out of hand.  That was where my question originated.

– Yes, some people seem to want to rush into being ‘Orthodox’ and preaching Orthodoxy too quickly.  I always thought that, if there should ever be another Great and Holy Council, there should be a new canon introduced, forbidding converts to write or speak publicly about Orthodoxy for a period of ten years or so after they’re received.

– A good discipline.  To be honest, I observed that problem more in the United States than here in England (I was received in the United States twenty-five years ago).  It’s all done with very good intentions; but things just take time. That’s perhaps something that people don’t always understand.  It takes a long time even to begin to become Orthodox, especially if you’re coming from a spiritual and cultural background which is not traditionally Orthodox.  This is because there are things that are passed down organically from generation to generation.  But of course that’s not the case when people come from a Western background, or for that matter from the countries of the former Soviet bloc, where the transmission of Orthodox culture was seriously impaired by decades of persecution.

– All right, could I just ask one final question. Could you give some advice to the non-Orthodox readers of our web-site, who may have encountered some kind of unpleasant things in Orthodox churches, especially ethnic Orthodox Churches?  What would you recommend to them after having gone through that negative experience?

– Well, you must understand that the Orthodox Christian way is always the way of the Cross, in one way or another. Sometimes it’s just a fact, sadly, that your cross can be the people around you in the Church. And then it is necessary to remember that you are seeking Truth, you are seeking Christ, and along the way God will send you what you need in order to find what you are seeking.

If I might add a supplementary point, it can be the other way round.  Especially perhaps in communities where there are already plenty of converts.  They can be a bit too quick to want to embrace the person who walks in the door and get them received and chrismated within a few weeks or months.  And that, in a way, can be just as off-putting as the other things, closed ethnic doors.  And it’s something we try to respect in our pastoral practice – it’s important to allow people the space to just come to church, to pray quietly or whatever, and to leave without having somebody jump on them and say hi, do come and join the Tradition.  Again, because it takes time.  And the Holy Spirit needs time to work in peoples’ hearts and lives to bring them to that point.  So again it’s a question of discernment, if you notice somebody, you have to ask yourself, should I go and talk to this person or should I just leave them quietly?  I suppose it’s a question of intuition.