Radonitsa, or Day of Rejoicing. Commemoration of the Dead.

On this day, the Tuesday of St. Thomas week, according to the order instituted by our Holy Fathers, we call to remembrance, in Paschal joy, all those who have died from the beginning of the ages in faith and in the hope of resurrection and life eternal.
admin | 01 May 2006 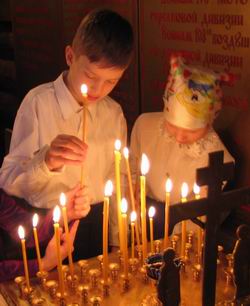 “On this day, the Tuesday of St. Thomas week, according to the order instituted by our Holy Fathers, we call to remembrance, in Paschal joy, all those who have died from the beginning of the ages in faith and in the hope of resurrection and life eternal.

“Having previously celebrated the radiant feast of Christ’s glorious Resurrection, the faithful commemorate the dead today with the pious intent to share the great joy of this Pascha feast with those who have departed this life in the hope of their own resurrection. This is the same blessed joy with which the dead heard our Lord announce His victory over death when He descended into Hades, thus leading forth by the hand the righteous souls of the Old Covenant into Paradise. This is the same unhoped-for joy the Holy Myrrhbearing Women experienced when discovering the empty tomb and the undisturbed grave clothes. In addition, this is the same bright joy the Holy Apostles encountered in the Upper Room where Christ appeared though the doors were closed. In short, this feast is a kindred joy, to celebrate the luminous Resurrection with our Orthodox forefathers who have fallen asleep.

“Today, the faithful departed are remembered in Divine Liturgies, ‘koliva’ is prepared and blessed in the churches in memory of those who have fallen asleep, and the Orthodox graves in cemeteries are blessed by the priests and visited by the faithful. On this day alms are given to the poor. Furthermore, it should be noted that due to the great spiritual joy this jubilant commemoration bears, it is called in the Slavonic tongue, ‘Radonitsa,’ or Day of Rejoicing.”

The special traditions and prayers for the departed.

While there are a number of variations depending on place and time, in general prayers for the departed are offered immediately upon the death of an Orthodox Christian:

There is a special Rite for the Parting of the Soul from the Body which may be celebrated at the moment of death.

During the period of time between the actual death and burial: Special services for the departed, variously known as the “Panikhida,” “Parastas,” “Pomen,” “Mnemosyno,” etc. are celebrated as the time of the Funeral Service approaches. In some traditions the Divine Liturgy is also celebrated on the morning of burial, in which case the Funeral Service is often celebrated the preceding night. A brief “Panikhida,” sometimes called a “Litiya,” is celebrated at the burial site, followed the prayers for the “sealing” of the grave.

On the third, ninth, and fortieth days after death: Again a “Panikhida” is generally celebrated on these days. A “Panikhida” may, of course, be celebrated at any other convenient time as well. [The observance of a 40-day “official” period of mourning after the death of a loved one is a very ancient and somewhat widely-practiced one. For example, members of the Jewish faith retain a similar period of mourning known as “Shiva.” During this mourning period the family receives visitors in their home, with whom they “sit Shiva” in honor of the newly-departed.]

At any other appropriate time: A “Panikhida” may be celebrated at any time as requested by the family. For example, many people celebrate such services on special days associated with the life of the departed, such as the anniversary of his or her birth, wedding anniversary, etc. It is also customary to celebrate such services in conjunction with the dedication of the cross placed on the departed person’s grave, together with special prayers of blessing.

On Church-appointed “Memorial Saturdays”: There are five Saturdays during the course of the year dedicated to the departed. On these Saturdays it is customary to celebrate the Divine Liturgy followed by a “Panikhida” for all the faithful departed.

On the Second Tuesday after Holy Pascha [Easter]: This day, known since early times as the “Day of Rejoicing,” is a traditional time to visit the graves of loved ones, request that their graves be blessed, and offer prayers and services for their repose. In many places today, this celebration occurs on the Sunday after Holy Pascha [Saint Thomas Sunday]. In some places it occurs in conjunction with Memorial Day observances.

In our daily prayers: In the Evening Prayers which Orthodox Christians recite each day there are special commemorations for the departed.

At every Divine Liturgy: There are petitions in the Litany which follows the Gospel and Homily in which the departed are remembered. In many parishes it is possible to add the names of the departed to a special list for commemoration at that time. In some parishes an additional “Litany for the Departed” is on occasion added to the Liturgy. Finally, in the preparation of the eucharistic bread, which occurs before the public portion of the Divine Liturgy, the priest takes particles of bread, each commemorating one of the faithful departed, and places them on the diskos, or special plate, on which the bread which will later become the Body of Christ is placed. As the priest removes each particle he mentions the name of a specific departed individual, generally from lists of names submitted before the beginning of the Liturgy by the faithful.

Again, there are slight variations in how Orthodox Christians in various places and at various times have offered prayers for the dead, but in general, that which is described above is universal in all Orthodox churches. And there are other customs which for some Orthodox Christians surround the commemorations noted above. For example, some Orthodox Christians prepare a special dish of boiled wheat and honey [other ingredients are often added], significant of new life, and bring it to the church in conjunction with the celebration of a “Panikhida.”