During Holy Week and Bright Week, the Church focuses all of her attention on celebrating the Paschal mystery -- the crucifixion, death and resurrection of the God-Man Jesus Christ -- so she does not hold memorial services for the dead (aside from remembering them in the proskomide of the Divine Liturgy) from Lazarus Saturday through Thomas Sunday (the second Sunday of Pascha).
| 17 April 2007 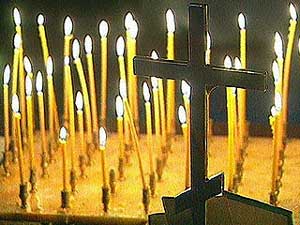 [Nine days after Pascha, on the Tuesday after Saint Thomas Sunday many Orthodox
Christians celebrate “Joy Day,” a Paschal commemoration of the
dead]

During Holy Week and Bright Week, the Church focuses all of her
attention on celebrating the Paschal mystery — the crucifixion, death and
resurrection of the God-Man Jesus Christ — so she does not hold memorial
services for the dead (aside from remembering them in the proskomide of the
Divine Liturgy) from Lazarus Saturday through Thomas Sunday (the second Sunday
of Pascha).

On Monday of Thomas Week, the Church resumes memorial
services for the dead. Among the Orthodox Christians of Belarus, the Czech
Lands, Poland, Russia, Slovakia, Ukraine and elsewhere, Tuesday of Thomas Week
is observed as “Joy Day” (“Radawnitsa,” “Radonitsa” or “Radunitsa” in the
various Slavic languages, names that come from the Slavic word for
“joy”).

Joy Day is a happy commemoration of the dead, on which we bring
the joy of Pascha into the cemeteries to our dead brothers and sisters in
Christ. We remember them in the Divine Liturgy and memorial service of the day.
We prepare and eat “memorial wheat” (known as “kollyva,” “kolyvo,” “kutya,”
“kuts’tsya” or “kut’tya” in various languages) blessed in church to remind us of
Christ’s words about death: “Unless a grain of wheat falls into the ground and
dies, it remains alone; but if it dies, it produces much grain” (John 12:24). We
visit the graves with the presbyters, who offer supplications for the dead and
bless them with holy water. We leave dyed eggs, symbols of the Lord Jesus
Christ’s resurrection, on the graves as a token of love and prayer for the dead
during the joyous Paschal season. We give alms in memory of the dead. 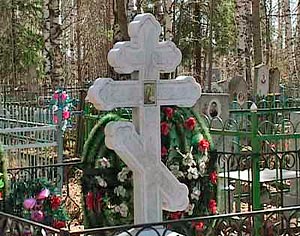 In
the Slavic lands of Eastern Europe, Joy Day observances included family and
village picnics in the cemeteries at which traditional Paschal foods were
served. Such celebration might seem out of place to modern man, who tends to
deal with death with much more reserve, denial and avoidance, if he visits a
cemetery at all. But joy in such a setting during Paschaltide is not strange to
Orthodox Christians, because it reflects the attitude of Saint Paul the
Apostle’s triumphant cry over the victorious resurrection of the Lord Jesus
Christ, echoed in Saint John Chrysostom’s Paschal homily: “Death is swallowed up
in victory! Death, where is your sting? Hades, where is your victory?” (1
Corinthians 15:54-55).

Why do Orthodox Christians pray for the dead, on
Joy Day and so many other occasions?

We pray for the dead because we
“look for the resurrection of the dead and the life of the world to come” at the
Lord Jesus Christ’s second coming, when “He shall come again with glory to judge
the living and the dead,” as we profess in the Creed. Looking ahead to the
reunion of souls and bodies at the Last Judgment and the final reckoning of
their fate, we pray for the dead as Judas Maccabeus did in Old Testament times:
“Judas and his men went to take up the bodies of the fallen and to bring them
back to lie with their kinsmen in the sepulchers of their fathers. Then under
the tunic of every one of the dead they found sacred tokens of the idols of
Jamnia, which the law forbids the Jews to wear. And it became clear to all that
this was why these men had fallen. So they all blessed the ways of the Lord, the
righteous Judge, who reveals the things that are hidden; and they turned to
prayer, beseeching that the sin which had been committed might be wholly blotted
out. And the noble Judas exhorted the people to keep themselves free from sin,
for they had seen with their own eyes what had happened because of the sin of
those who had fallen. He also took up a collection, man by man, to the amount of
two thousand drachmas of silver, and sent it to Jerusalem to provide for a sin
offering. In doing this he acted very well and honorably, taking account of the
resurrection. For if he were not expecting that those who had fallen would rise
again, it would have been superfluous and foolish to pray for the dead. But if
he was looking to the splendid reward that is laid up for those who fall asleep
in godliness, it was a holy and pious thought. Therefore he made atonement for
the dead, that they might be delivered from their sin.” (2 Maccabees
12:39-45)

We pray for the dead because our Lord Jesus Christ is “the Lord
of both the dead and the living” because He “died and rose and lived again”
(Romans 14:9). He said: “I am He who lives, and was dead, and behold, I am alive
forevermore… And I have the keys of Hades and death” (Revelation 1:18). And
“this is the confidence that we have in Him — that if we ask anything according
to His will, He hears us. And if we know that He hears us, whatever we ask, we
know that we have the petitions that we asked of Him” (1 John
5:14-15).

We pray for the dead because we are bidden to “pray for one
another” (James 5:16) and “whether we live or die, we belong to the Lord”
(Romans 14:8). Death does not end our membership in the Church, for she is the
“city of the living God, the heavenly Jerusalem” made up of “an innumerable
company of angels” (the bodiless heavenly powers) and “the spirits of righteous
people made perfect” (the dead in Christ) as well as us alive on earth (Hebrews
12:22-24). Our sense of fellowship in the Church transcends death, for we are
one in the risen Christ.

We pray for the dead because we can pray to God
to forgive our brothers and sisters their sins: “If anyone sees his brother
sinning a sin which does not lead to death, he will ask, and He will give him
life for those who commit sin not leading to death” (1 John 5:16).

We
pray for the dead because we love them, and neither sin nor death can overcome
that love we have for them in Christ: “Neither life nor death… shall be able
to separate us from the love of God which is in Christ Jesus our Lord” (Romans
8:30). “Love never fails” (1 Corinthians 13:8). “Love will cover a multitude of
sins” (1 Peter 4:18).

“Christ is risen from the dead, trampling down
death by death, and upon those in the tombs bestowing life!”

With prayers
and good will,