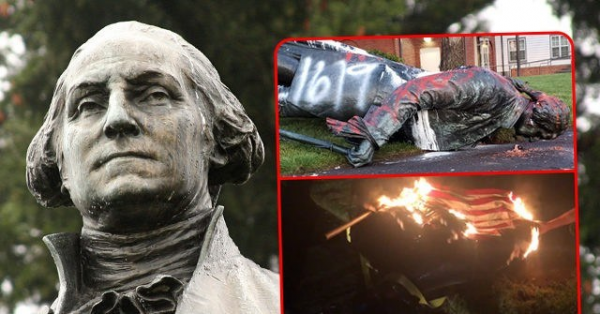 In June 2015 my husband and I went to Charleston, SC, to visit family. The shooting at Emanuel AME Church had just taken place and everyone was in shock and grieving. We walked around the area and saw the many, many flowers, crosses, and other tributes laid there.

When we arrived in town the previous evening we learned a controversy was brewing over the Confederate flag that flew on the State House grounds in Columbia (where we went to college). Many people were calling for it to be taken down. Others were saying it had a historic right to be there.

I felt undecided. I thought it’s generally not a good idea to erase history. On the other hand, the flag wasn’t expressing something people still feel; it’s a mere marker of something that happened long ago. It’s like a tombstone. But, on another hand, we don’t take down tombstones. Even Hitler has a tombstone, I suppose.

So my thoughts were going back and forth. As we came to the front of the church, I noticed one of the signs there. It said “Take Down the Flag” and then in smaller letters, “It hurts us.”

Those words changed my mind in an instant. It hurts them! That went right to my heart. Well, take it down, then! That flag doesn’t represent something people believe in and want to restore; there’s no public movement to secede from the Union and establish Confederate states. It doesn’t represent current beliefs and convictions, only commemorates something past. It’s OK to take it down.

So, when I see statues like this one (George Washington) destroyed, I try to make room first for that thought, “It hurts us.” Like this:

When I see George Washington splattered with paint, I understand how it could be painful for black people to see any white person elevated as a hero. George Washington and other pre-Civil War leaders were able to accomplish what they did because of slaves who cooked their food, made their clothes, reared their children. Under the base of their statues lie hundreds of slaves.

But, unlike a Confederate flag, a statue of George Washington represents beliefs that are still strongly held. He is an exemplary hero and stands for the basic ideals of a country, which many of us still share and love. He represents something that is alive, not a cause that died long ago. A segment of society should not trample on the beliefs of another segment.

The other question is where would it ever stop? There is a kind of blood-lust that comes with destruction. It is never satisfied. How does that intoxicating rage to destroy get turned around and begin to build?

Any kind of positive goal will require unity with all the other Americans. But why would a newly empowered and respected minority even want to forge ties with the old majority? Why would they put down their weapons and embrace friendship and common cause?

Why would they want to have peace at all? Anger and hatred are intoxicating. Eventually the war against the enemy turns inward; members criticize and condemn each other, and struggle for power. A movement starts eating its own leaders. In communist prison, people imprisoned for their Christian faith might get a new cell mate who used to be a communist leader—maybe even the same judge that condemned them to prison. Interpersonal trust breaks down, and it becomes a war to preserve your own welfare against everyone else.

How does that intoxicating rage to destroy get turned around and begin to build? Does that *ever* happen, or is it just one coup after another?

Is it possible to have one nation, after all? Or are we beginning an endless process of destruction?