Rediscovering Our Apostolic Fire: A Reflection on a Trip to Albania 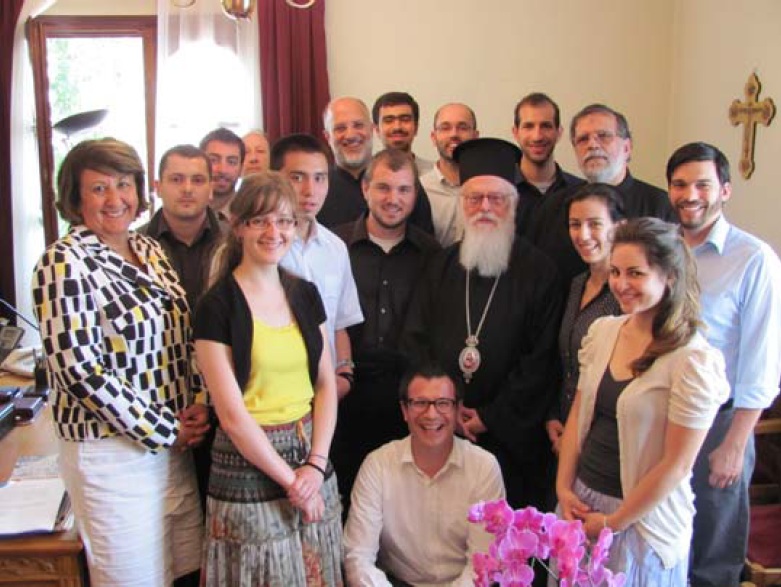 During my St. Vladimir’s Seminary education I am often challenged by theological and spiritual quotes. Recently there was one in particular that struck me and which I will carry with me in the future. This is something that I read in one of the books required for a summer mission class, and which I was blessed to hear directly from the same author. When he found himself having to take important and difficult decisions, Archbishop Anastasios of Albania followed God’s will by asking himself: “Is God enough for me?”

Wondering if God is enough for us and for our lives is a question that we are called to ask ourselves when we search for direction and attempt to understand God’s will. Twenty-one years ago Archbishop Anastasios decided that “God was enough” in his life, and he left his prestigious position as a Professor at the University of Athens for one of the hardest missionary challenges of modern era. God was in fact enough as He worked through His Beatitude to help resurrect the Church in Albania.

In May, my wife Anna and I were blessed to join the 2012 Missions Institute of Orthodox Christianity/OCMC team to Albania led by Fr Luke Veronis, and witnessed God’s incredible work among the people of Albania. Our mission trip was preceded by a week of class entitled The Missiology of Archbishop Anastasios at Holy Cross Greek Orthodox School of Theology, where we studied the Archbishop’s writings, the theology and the history of missions, culture and gospel, intercultural relations and how globalization has affected religions.

A central starting point was to understand that missions are not only important for the few who are interested in becoming missionaries, but rather is an essential part of our Christian faith. We, as members of the One, Holy, Catholic and Apostolic Church, are commissioned to evangelize all nations. How do we evangelize? If we look among converts we realize that people come to the faith by observing another person, through the living example of a Christian presence. For us Orthodox, the question that arises is: Are we comfortable with evangelization? Are we ready to be a light to all people and not only to take care only of our own?

Missions play a central role in Christianity, and Archbishop Anastasios courageously affirms that a denial of missions is indeed a denial of Orthodoxy. Any parochialism which limits the work of the Spirit is a denial of God and the Church. Missions means combining the two great commandments: “Go forth and make disciples of all nations” and “Love your neighbor as yourself.”

During this class, we examined the case study of Albania, and learned how unique the situation there was even compared to the other former totalitarian countries which suffered social, cultural and religious oppression. In 1967 the ruthless dictator Hoxha declared the country to be the world’s first atheistic state. Hundreds of churches and mosques were systematically destroyed, and hundreds of religious leaders killed or sent to camps. Owning a

Bible meant ten years in prison and sometimes even your life. The communist regime had deprived the people of Albania of the Word of God.

In class we talked about Albania as a developing country and how the Church has “resurrected” over the past 20 years, although it is still in great need. Our goal for this trip was to analyze how the church has succeeded in living out the missiology of the Archbishop, and where the church has not yet lived up to this missiology.

During our two weeks there, we visited many of the local Church ministries, such as the children and the youth ministries, schools and a university, radio, women’s group, a very dynamic humanitarian organization called Diakonia Agape, as well as the Theological Academy and an orphanage. We met many people who offer their ministry to the Church and dedicate their lives in the service to the ones in need. We had the opportunity to interact with the youth and the university students on several occasions and share with each other our experiences, thoughts and perspectives. We engaged in some group discussions over themes such as secularization, social media and challenges that a Christian faces in today’s society.

The Church in Albania is in a very unique situation within a multicultural society, and although founded at the time of the Apostle Paul, now presents a reality similar to the Church of the early centuries. The Church lives with a great excitement and hope even though the cross to carry for the Christians is particularly heavy. Certainly, they have their problems, complaints and troubles, but visiting the many ministries in Albania, we were inspired to see how the people working for the Church serve with joy, faith and love. Many of the Church leaders we met were part of the youth who participated in the youth ministries, university ministries, and summer camps run by Fr Luke and Presbytera Faith Veronis over 15 years ago. Now they serve in leadership roles throughout the Church in Albania. We saw how the missionary seeds planted years ago bore fruit.

This experience impacted my Seminary education, and more generally my life as a Christian, in a profound way. What I realized from this experience is that even before learning about missions and ecclesiology, what we were studying and seeing was what Christianity is truly all about: loving our neighbor regardless of his or her race, culture and religion.

We bring witness to our Christian faith by providing an example with our own life, a life of love for all people.

Every human being is a divine image of God, and as Christians who love God, we are also called to love all people. With this same love we share the Good News of our Savior with others, and take care, as Archbishop Anastasios admonishes, not to simply wear the cross as an ornament of a comfortable Christianity, but rather to live out the cross as we preach the gospel to the ends of the earth, fearing nothing because we know that the safest place for us is in the will of God.

Christianity means sharing with others what we have received. We need to overcome the objection of going beyond our national borders simply because the Church has her needs here. Our focus and our effort for the proclamation of the Gospel has to be simultaneously at a local, at a national and at a global level. We Orthodox are proud of the apostolic succession of our Church and we claim that our faith is the same one given to the apostles. The challenge now presented to us is to regain our lost apostolic zeal, the same missionary spirit which took the apostles and Christians for many centuries to proclaim the Good News to all nations.