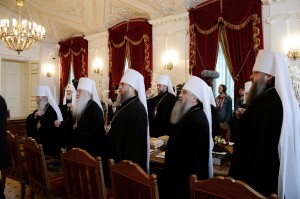 On 29 May 2013, the regular session of the Holy Synod of the Russian Orthodox Church, chaired by His Holiness Patriarch Kirill of Moscow and All Russia, opened in St Petersburg, in the historical building of the Sacred Governing Synod.

Summoned for the summer session (March-August of 2013) are Metropolitan Merkury of Rostov and Novocherkassk, Archbishop Mark of Berlin, Germany and Great Britain, Archbishop Dimitry of Vitebsk and Orsha, Archbishop Varfolomey of Rovno and Ostrog, and Bishop Savvaty of Ulan-Ude and Buryatia.

His Holiness Patriarch Kirill addressed the members of the Holy Synod, saying in particular:

“I cordially greet all members of the Holy Synod at the regular session in this historical building of the Sacred Governing Synod. This is the building in which our pious predecessors took momentous decisions concerning the life of the Church and our Motherland.

“I feel that these halls have a special atmosphere, and the fact that the Holy Synod meets here for its session has occasioned many thoughts in me. First of all, I am asking myself ‘Why was it necessary to ravage and destroy all this? Why was it necessary to kill so many people and cause so much destruction? And then such huge effort was made to restore it, and everything, by God’s grace, has resumed its natural course.

“The Church, unlike any other public institution, is a bearer of historical memory. And the Church regards memory as a part of tradition, the Holy Tradition, which does not only mark events but also offers their spiritual interpretation. For this reason we should openly speak to our people, telling them what they should avoid in every possible way and what path they should follow in order to our country might move forward and would not fall into an abyss or turn off its path…

“We should thank God for everything that is going on in our Motherland, for the revival of faith and the Church. Speaking about the Motherland, I mean the whole historical Rus’ and modern Russia, Ukraine, Belarus, Moldova, and Central Asian countries – all the territories where the Russian Orthodox Church has been performing its ministry. We should thank the Lord and continue our prayers and our endeavours so that the historical path, that our people have been following, would be clear, straight and would lead us to achieving goals blessed by God.”