Source: Basilica.ro
The Honourable Head and the right hand of Saint Nephon II the Patriarch of Constantinople, which are kept at the Metropolitan Cathedral of Craiova, were moved to a new silver reliquary last Sunday.
Aurelian Iftimiu | 18 July 2019 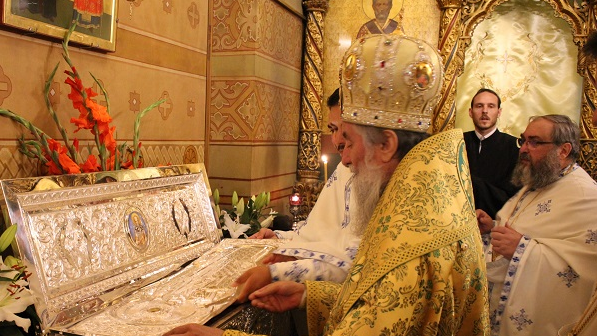 The new reliquary was blessed by His Eminence Metropolitan Irineu of Craiova on July 14 following the Divine Liturgy.

St Nephon’s holy relics have been displayed for veneration at St Demetrius Orthodox Cathedral in Craiova since 1949.

Saint Nephon was born in the Peloponesse peninsula in southern Greece in the fifteenth century.

From 1498 to 1505 he was Metropolitan of Wallachia during the reign of Prince Radu IV the Great.

He reposed in 1508 and was glorified in 1517 during the reign of his spiritual son, St Neagoe Basarab. St Nephon’s holy relics were brought to Wallachia the same year.

His feast day is on August 11.

Photography courtesy of the Metropolis of Oltenia