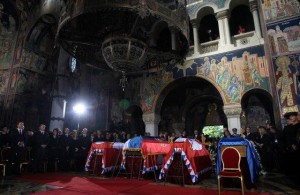 The remains of the four members of the Krađorđević royal family were buried in the royal family crypt of the Church of St. George with highest state honors.

The Serbian Army (VS) Guard carried the coffin of King Petar II into the crypt while the other three coffins were carried by members of the Kingdom of Serbia Association.