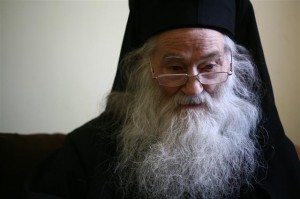 On June 16, 2013, following a prolonged illness, Archimandrite Justin (Pârvu) of the Petru Vodă Monastery, one of the most revered Elders in Romania, reposed in the Lord.

Fr. Justin was born in the village of Poiana Larguliu (Neamț County) on Feburary 10, 1919, and entered the Durău Monastery in 1936. In 1939 he enrolled in the Theological Seminary in the Cernica Monastery. He served as a chaplain on the Eastern Front during World War II from 1942-1944. He was imprisoned for political and religious reasons between 1948 and 1964. From 1966 to 1975 he lived in the Secu Monastery, and from 1975 to 1991 in the Bistrita Monasery. In 1991 he founded the Petru Vodă Monastery, where he lived and served as abbot, and in 1999 the Petru Vodă Convent along with a school and hospital.

Most viewed articles
Words from St. Isaac of Syria176
“Do Not Weep”138
Best Films of the Pokrov Film Festival Have Been Determined121
Christ the Life Giver115
Archbishop Peter of Chicago and Mid-America in an interview to Poltava Diocese’s press service reveals interesting moments in the life of St John (Maximovich)110
(VIDEO)Celebrating 5 years of Byzanfest International Orthodox Film Festival68
Patriarch Kirill Answers Questions from Participants of the Ninth Faith and Word Festival56
The Religion of Self10
Using Our Time Wisely to Cultivate the Seeds of Faith2
Most popular authors
Pravmir.com team355
Archpriest Stephen Freeman176
Archpriest Peter Olsen138
Fr. Theodore Stylianopoulos115
Fr. Gabriel Bilas10
Priest Luke A. Veronis2