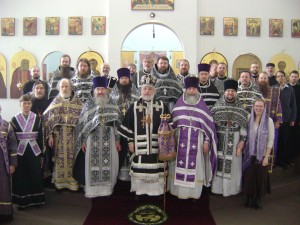 We, the clergy of the Diocese of Canada, having assembled for the annual Lenten retreat and convocation at St Nicholas Cathedral in the divinely saved city of Montreal, under the presidency of the Most Reverend Gabriel, Archbishop of Montreal and Canada, note that this fraternal meeting, despite the poignancy of the questions discussed, proceeded in the spirit of concord. Hence, our fellowship enabled all of its participants to find strength of heart in anticipation of the approaching greatest Feast of Feasts—that of the Holy Resurrection of our Lord, God and Savior Jesus Christ.

This year, the whole Russian world, both in the homeland and in the Diaspora, marks an important date for our history: the 400th anniversary of the accession of the Romanov Dynasty. This is not simply a noteworthy historical landmark, but one of the key events in Russia’s spiritual history. The Orthodox Church, the true savior of Rus’ during the Time of Troubles, at whose summons the first of the sovereigns of the Romanov Dynasty was called to the throne of Muscovy, marks this date as such. After this day we Russians did not take up the interpretation that Russia is a mere state, Russia is an empire: in the Romanov era it was formed, by the will of God, as an Orthodoxy whole (in the words of the remarkable ecclesiastical thinker of the Russian Diaspora, Archimandrite Constantine [Zaitsev]) It can be nothing else, and only from this vantage point ought one to view Russia, if we are to discover the key to clarifying its historical purpose. The participants in the meeting were delighted to learn that that the main celebrations of the “Romanov Days” will take place within the Diocese of Canada, at Holy Trinity Cathedral, in Toronto—the largest parish of the Russian Church Abroad. The celebrations will conclude in September, when the session of the Synod of Bishops will be held in Toronto.

In our Diocese other memorable days will also be marked this year, perhaps not so noteworthy for all of Russia, but of particular value to us here. We are speaking of the 75th anniversary of the Alexander S Pushkin Russian Church School, attached to St. Nicholas Cathedral in Montreal, and of the 50th anniversary of the Church of the Kazan’ Icon of the Mother of God, in Rawdon, Quebec. The participants in the meeting also extended heartfelt congratulations to their Ruling Bishop, the Most Reverend Vladyka Gabriel, on the 5th anniversary of his appointment to the now united see of Canada.

The churching of Russia is unthinkable without constant care for the Orthodox upbringing of the youth, its preservation within the bounds of the Church, which is particularly difficult in the Diaspora. Discussing the work of the Diocesan Youth Committee, the participants in the meeting called upon the flock to support in every way the efforts toward the successful organization of the St. Herman Youth Conferences, and never to forget that precious corner of Canadian Rus’: the Ruskoka Youth Camp, with its beautiful wooden church dedicated to the Royal New Martyr, the Tsarvich Alexei Nikolaevich Romanov. We also hope that the Orthodox youth of the Diocese of Canada will attend the St. Herman’s Conference and, of course, the Ruskoka Camp.

We were informed that this year the Church Musicians’ Conference will again be held within the Diocese of Canada, and it is our hope that singers and conductors from our choirs will take part in it.

In the course of our discussion of the affairs of the Diocese, Archbishop Gabriel reminded everyone that the restoration of our St Nicholas Cathedral, which had suffered the effects of a destructive fire, is far from complete. The self-sacrificing generosity of its parishioners and well-wishers throughout the Russian Diaspora has permitted us to raise the church building literally from the ruins, but much work remains to be done: in particular, it is essential to repair the outer walls, not to mention the sanctuary and the interior appointments. The collection of funds to help our cathedral has now been taken up by the Diocesan Finance Committee, and this will be set forth in a special appeal.

From information provided by Archbishop Gabriel, we learned with spiritual joy that the miraculous Kursk-Root Icon of the Mother of God, the Directress of the Russian Diaspora, will soon visit our Diocese. We also anticipate that, by the mercy of God, the miraculous icon of the Mother of God, “The Softening of Evil Hearts”, which was present at the Local Council of the Russian Orthodox Church in 2009, where His Holiness, Patriarch Kirill of Moscow and All Russia, was called to his present ministry, will finally visit us in autumn. At the meeting in Montreal we also spoke of how the restoration of the unity of the Russian Orthodox Church has been providential: it has united us to the entire multitude of the new martyrs of Russia, who without ceasing intercede for us before the throne of the Lord. We hope that all who suffered for the Faith of Christ during the years of persecution will be venerated in the homeland and the Diaspora without exception, “For what man knoweth the things of a man, save the spirit of man which is in him? Even so the things of God knoweth no man, but the Spirit of God.” (I Cor. 2: 11).