Russia calls for protection of Christian holy places in Maalula 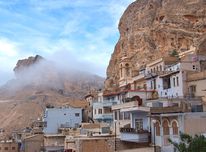 Moscow, September 6, Interfax – The Russian Foreign Ministry has expressed concern over the attempts made by the armed opposition in Syria to take over the city of Maalula, a symbol of the Christian presence in Syria.

“Moscow is deeply concerned over the fact that terrorist attacks in Syria have affected Maalula, a symbol of the Christian presence in this country. Its residents speak the Aramaic language, which is almost extinct and is the language in which Jesus Christ preached, and the churches located in this city are among the oldest and most honored churches of Christians,” the Russian Foreign Ministry’s information and press department said in a commentary released on Friday.

The Russian Foreign Ministry called “on everyone who cares about the fate of the people of Maalula to do everything possible to prevent their killing and the destruction of Christian holy places.”

“Terrorist attacks need to be stopped immediately. Special responsibility for them rests with those forces in the region and outside of it that encourage terrorists, intentionally or not,” the document says.