Russia is fated to become center of Christian world – priest 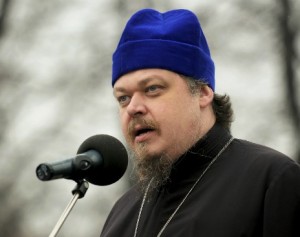 Moscow, July 1, Interfax – Archpriest Vsevolod Chaplain, chairman of the Synodal Department for Church and Society Relations, said Russia is moving towards maximum self-reliance and must become the center of global Christianity.

“It is not accidental that many see Russia as a defender of Christian ideals and traditional moral values, as a country that provides a real alternative to the cult of the golden calf and to a suicidal understanding of what freedom is,” Father Vsevolod writes in an article, published in the Rus Derzhavnaya newspaper on Monday.

Russia must start feeling it is the center of the Christian world, he writes. Only if it does will it become an accomplished nation. The rest is “first, petty and, second, self-destructive for it,” the priest said.

“Russia has told the world in clipped terms that it can definitely speak its own language, the language of a self-sufficient and strong nation, whose traditions and experience give it the right to walk its own way, to defend its own ideas of how society should be set up, and also to offer it to the world,” Fr. Vsevolod said.

However hard one tried to influence the state into following the opinions of narrow groups that link themselves to foreign trends and position themselves as the mouthpiece of “would-be Russia”, or “other Russia,” or “real Russia, nothing worked, he said.

“It is not accidental that we said in clear terms despite pressure coming from the West that we do want to protect children from early sexualization and from the propaganda of homosexuality. And we also said that support for foreign adoptions of Russian children is an extremely irrational step. We do not want these children, adopted by perverts, to lose the hope in which many of them were baptised, and to lose a normal life,” Fr. Vsevolod said.

Most viewed articles
What Is Rejected Becomes the Cornerstone117
His Beatitude Patriarch Theophilos III and bishops of the Russian Church Abroad attend a concert marking the 150th anniversary of the birth of Sergei Rachmaninoff in Jerusalem85
Hierarch of the Jerusalem Patriarchate Speaks in Support of His Holiness Patriarch Kirill84
Utah Church Prepares, Welcomes All for Consecration82
The Savior of the Hopeless, or Is It Possible to Be a Good Person and Not Be Saved?69
Supreme Court Overturns Roe v. Wade in Mississippi Abortion Ruling59
The Forgotten Virtue of Stability53
‘The post-Roe generation’: Pro-lifers set their eyes on heartbeat bills, chemical abortion bans47
Most popular authors
Pravmir.com team251
Archpriest John Moses (+2019)117
Alexander Tkachenko69
CBN News59
Hieromonk Gabriel53
Ryan Foley47