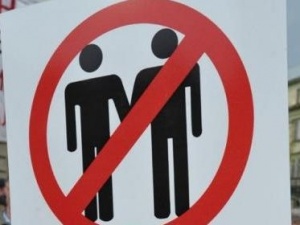 Public displays of homosexual activity may be banned in Russia, four months after they were banned in Saint Petersburg, one of Russia’s largest cities.

Legislators are planning on making sure that such activity stays behind closed doors, Voice of America reports.

Tensions between gay rights activists and the Russian government have long been high. Earlier this year, activists in Saint Petersburg released rainbow balloons in a city park and tried to hold a demonstration, but their efforts were broken apart by police.

And in May, around 40 people were arrested in Moscow after gay activists who were demanding the right to hold a gay pride parade in the Russian capital clashed with Orthodox Christians protesting against homosexuality.

Many European nations, who either approve of same-sex marriage or stand firm behind upholding the rights of gay people, have criticized the Russian response to gay rights demands. Last month, at a gay pride parade in Berlin, Germany, a cannon shot a rainbow of colored confetti at Russia’s embassy.

Public opinions on homosexuality in Russian society are also very divided. Many youths want a more liberal government tolerant of homosexuals, but those on the traditional side want to preserve long-held views in society supported by the Russian Orthodox Church, which deems homosexuality to be a sin.

“We are under attack by persecutors. The danger is in the very fact that blasphemy, derision of the sacred is put forth as a lawful expression of human freedom which must be protected in a modern society,” expressed Patriarch Kirill, the head of the Russian Orthodox Church, at a national prayer event in April, addressing activists attacking churches over its support of the government and conservative views.

To highlight how drastic the division of opinion in Russia goes, the Voice of America article also featured the story of a Saint Petersburg man identified as Artem, who has made it his mission to track down gay rallies and inform the authorities of such activities.

“To him, gay parades and posters, gay-themed talk shows and art shows all add up to undermining traditional Russian society with the gay lifestyle. He says that Russia will never permit open displays of what he calls ‘filth,'” the article states.

To that, the article composites the accounts of Olga and Irina, a same-sex couple asking for tolerance, equal rights and the ability to get married in Russia. But with no such changes on the horizon for the Eastern European country, they have made plans to go to Finland to get married.