Source: CRUX
Inés San Martín | 24 August 2017
ROME - During the third day of his visit to Russia, Pope Francis’s right hand man, Cardinal Pietro Parolin, met with President Vladimir Putin, who said his country values “the trusting and constructive dialogue” that has developed with the Vatican. 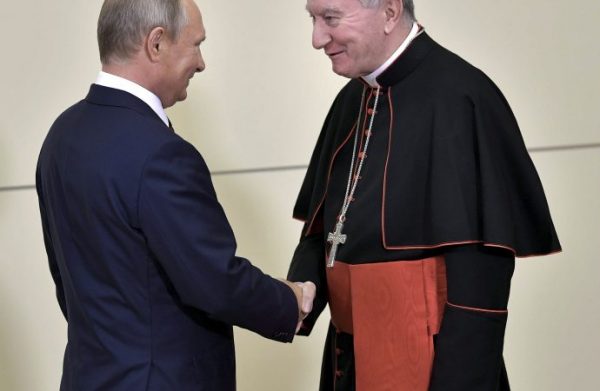 Cardinal Pietro Parolin’s visit marks the first of the Vatican’s Secretary of State to Russia in 19 years. The last to do so was Cardinal Angelo Sodano, who was in Moscow in 1999 to consecrate its Catholic cathedral. During a meeting with President Vladimir Putin, Parolin said the diplomacy between the two countries “compromises various levels and covers the political spectrum and also various cultural initiatives that we pursue.”

On the agenda were several topics in which the two countries have a shared interest, from the situation of Christians in the Middle East to cultural exchanges.

“I pass on the warmest greetings from His Holiness Pope Francis, who recalls his meetings with you very well,” Parolin told Putin at the beginning of the meeting, held in Bocharov Ruchei, the summer residence of the Russian president, in Sochi.

According to the transcript provided by the Kremlin, the two leaders recalled not only Putin’s visits to the Vatican, in 2013 and 2015, where he was welcomed by Francis, but also the historic encounter between the head of the Catholic Church and that of the Russian Orthodox Church.

The meeting between Francis and Patriarch Kirill, which took place in Feb. 2016 in Cuba, as the pope was on his way to Mexico, was the first time the leaders of the two churches had met each other since the Great Schism, over a millennial ago.

“I am very pleased to see that the dialogue continues between our churches,” Putin said, before acknowledging the meeting Parolin had had with Kirill the day before. “We welcome this dialogue that has begun directly between the Holy See and the Russian Orthodox Church.”

The cardinal echoed these words, saying that the visit and the meeting held August 23 came at “an important time with regard to our bilateral interstate relations, and also with regard to the relations between the Holy See and the Russian Orthodox Church.”

Parolin’s visit marks the first of the Vatican’s Secretary of State to Russia in 19 years. The last to make the trip was Cardinal Angelo Sodano, who was in Moscow in 1999 to consecrate its Catholic cathedral.

Speaking about inter-church relations, he highlighted not only the summit in Havana, but also the arrival in Russia of the relics of St. Nicholas. Guarded by the Catholic Church in Italy, the saint is venerated by both Catholics and Orthodox. During the time the relics were in Moscow and St. Petersburg, an estimated 2.3 million faithful venerated them.

“All of Russia’s Christians express special thanks to you and to Pope Francis for this,” Putin said, before highlighting an art exhibition of works from the Vatican museums held at the Tretyakov Gallery. The Russian leader said a reciprocal event is being prepared, and it could take place in 2018.

Parolin said this highlighted the fact that the diplomacy between the two countries “compromises various levels and covers the political spectrum and also various cultural initiatives that we pursue.”

He also noted that a “new dynamic” has emerged over recent times in relations between the two churches. “I hope that all participants in this process will continue working in this direction in order to expand our cooperation and bring us even closer together,” he said.

The rest of the meeting was private, and at this point, no information has surfaced about what the dignitaries spoke about. However, recent events show that what Putin called “common humanitarian values” between the two churches and two nations has included the plight of persecuted Christians in the Middle East.

A statement from the Kremlin dated August 22 said that the two would discuss key issues of the Russia-Vatican relationship in the political, cultural, humanitarian realms as well as other areas.

“They will also exchange opinions on current international issues, primarily the state of affairs with Christians in the Middle East and North Africa, as well as the situation in Syria and Ukraine,” the statement said.

In recent years, hundreds of Christians have been kidnapped or wrongfully imprisoned, their faith used against them. This…