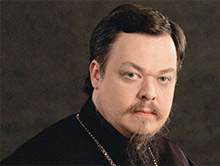 Stavropol, December 12, Interfax – Russia will not copy foreign political models, no matter if it is Western democracy or a world caliphate, Archpriest Vsevolod Chaplin, the head of the Synodal Department for Church and Society Relations, said.

“I hope that the history of Russian statehood and Russian pubic processes, especially those that occurred in the past twenty years, showed convincingly that Russia has a right and is able to independently determine the philosophical, spiritual, and ideological foundations of its statehood,” Father Vsevolod said at the World Russian People’s Assembly held in Stavropol on Wednesday.

The priest believes Russia “does not need to borrow anything from anyone.” “We have solid foundations to choose our historical path independently,” he said.

Fr. Vsevolod believes that “we can confidently tell our friends and enemies in different parts of the world: there will never be Western-style democracy copied from somewhere in Russia, and there will never be a ‘world caliphate’ in our country. We can choose our path ourselves, without anyone putting pressure on us from the outside.”

“We will have out own statehood, which will include a strong central administration, democracy, common civil values, as well as Orthodox, Muslim and other traditional religious values,” he said.

The priest said those who believe this choice can be planned or determined from the outside are wrong. However, Fr. Vsevolod believes this choice “will have to be defended in very difficult conditions” because there are people who “would like to cause chaos in some regions of the world, including in our country,” and “we shouldn’t give our enemies the pleasure of getting a result from this game.”