Russia should thank the courageous people of Ossetia

Bishop Feofan of Stavropol and Vladikavkaz in an interview with Interfax-Religion spoke about the feelings of the residents of the republic after a year after the Beslan tragedy; why many Ossetians-Muslims became Orthodox; and how extremism could be overcome.
| 14 December 2005

Bishop Feofan of Stavropol and Vladikavkaz in an interview with Interfax-Religion spoke about the feelings of the residents of the republic after a year after the Beslan tragedy; why many Ossetians-Muslims became Orthodox; and how extremism could be overcome.

– What would you like to say to your flock and all the residents of this troubled region after a year after the terrorist act in Beslan?

– I would like to say it again: Russia must be grateful to the courageous people of Ossetia, who have suffered through this past year with honour and dignity and have not slid into the way to which the terrorists were pushing them. You may remember, they said earlier that Armageddon would break out and engulf the entire Caucasus – It could have happened on the 9th day, on the 40th day or half a year after the act of terrorism. That it did not happen should be attributed to the people of North Ossetia. 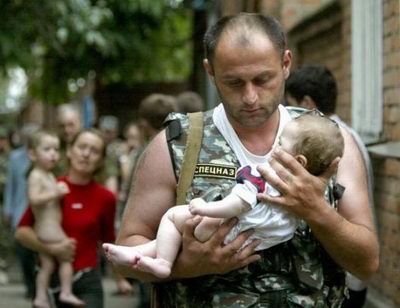 At the same time I would like to repeat, addressing first of all the mothers and relatives of the people who send or are going to send the militants to commit evil crimes like the one in Beslan. Let them look back more attentively at the pain and grief of the Beslan mothers, look at the photos of the killed children, and then look at their own children and think about what their near and dear are committing. It is not only the force of weapons, not only military troops, but the relatives (and the monsters have them), that must prevent crimes, as they bring hell, blood and tears which will affect all people, them including.

– What do you think about the latest proposal by North Ossetia’s head Taimuraz Mansurov to life the moratorium on death penalty?

– This is a very complicated issue. As a clergyman, as a bishop, I might talk about charity. But as a man, who has been an eyewitness of the hell flared up by the terrorists, I fully understand the head of the republic. Such crimes should not be left unpunished, and the punishment should not be lenient.

– Is it true that after the Beslan tragedy many people of North Ossetia, ethnic Muslims, were baptized?

– People convert to Christianity. This is an established fact, but we have no statistical data. Sympathies with Islam have considerably diminished over the last year. The terrorists have served Islam a bad turn. I shall never say that Islam is identical to terrorism, but, to my great regret, the terrorists have hidden behind the name of Allah, thus having inflicted irreparable damage to Islam.

– You, not only as a bishop, but as a resident of the Caucasus, must have pondered how to overcome extremism.

– The situation calls for a complex of measures. First of all, strong state policy and power are needed for the people to feel that they are living in a state, which is able to protect them. On the other hand, the citizens should be aware that their security is in their own hands and for that it is necessary for them to realize that the imbalance of the last 15 years when people were dragged into various political parties and ideologies is a way leading to disaster. Time has come to seek consolidation. Without consolidation no declared laws would be helpful. Consolidation is only possible on the basis of the national idea.