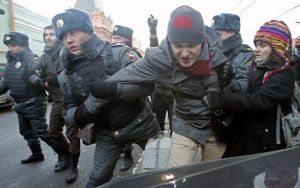 Last month, the Russian parliament approved by a vote of 388-1-1 a draft law outlawing the dissemination of “homosexual propaganda” to minors, prompting the Obama administration to pull out of “civil society” dialogue.

The legislation, backed by the combined efforts of the Kremlin and the Russian Orthodox Church, also would ban public events promoting homosexual rights, charge fines of up to $16,000 for any public displays of “homosexual propaganda,” and block web content inappropriate for younger audiences. After two more readings, it goes to Russian President Vladimir Putin for his signature.

The bill, designed to protect minors from the influence of “sodomy, lesbianism, bisexuality and transgenderism,” is part of a growing national trend towards promoting traditional Russian values over Western liberalism.

“We either become a tolerant Western state where everything is allowed—and lose our Christianity and moral foundations—or we will be a Christian people who live in our God-protected land in purity and godliness,” said Rev. Sergiy Rybko, a priest in the Orthodox Church.

The new restrictions “were increasingly calling into question whether maintaining this government-to-government mechanism was either useful or appropriate,” she said, adding, “Nobody should be discriminated against for who they love.”

That response is unlikely to bother the Russians, according to David Aikman, a journalist and foreign policy consultant.

“The Russians will say, ‘Who are you to tell us what to do?’”Aikman said. “The U.S. has no moral high ground to stand on, according to the Russians, because the Kremlin views the West as decadent, immoral, and corrupt.”

Aikman added that Russian identity is tied up with Orthodox Christianity, and that Russians are slow to change attitudes. In some ways, Russian culture is where American culture was in the 1960’s. “Homosexuality is not a valid lifestyle, and it is even viewed as a threat,” Aikman said.

According to opinion polls taken last year by the Levada Center, almost two thirds of Russians find homosexuality “morally unacceptable and worth condemning.” And about half opposed gay rallies and same-sex marriage, while almost a third thought homosexuality was the result of “a sickness or a psychological trauma.”

Many Westerners find such attitudes shocking, but in some ways “Russia is one of the most pro-family countries out there,” said Stephen Baskerville, professor of international relations at Patrick Henry College. “St. Petersburg has been particularly active on family issues and parental rights. … There is nothing wrong with trying to uphold traditional values and protecting children.”

Despite their claims of upholding pro-family values, Russian politicians faced criticism from their own constituents, as well as the international community, for recent measures restricting adoption options for thousands of children languishing in orphanages. In late December, parliament passed, and Putin signed into law, a ban on Americans adopting Russian children. The ban was a retaliation for sanctions adopted by U.S. lawmakers against prominent Russians accused of human rights violations. Although the Russian Orthodox church supported the ban, Russian citizens held vigils in protest, accusing their leaders of using children as political pawns.

“Any policy that is extreme and violent is bad,” Aikman said. “No one should approve of witch hunts against gays.”