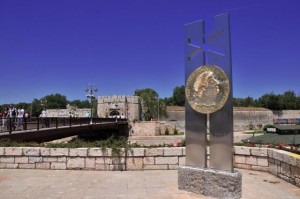 A memoiral in Niš honoring Constantine the Great

BELGRADE — Russian Ambassador to Serbia Aleksandr Chepurin will be the host of an event that will launch the marking of 1,700 years of the Edict of Milan.

After the ambassador, the gathering will be addressed by co-chairs of a committee set up to organize the celebrations: President Tomislav Nikolić and Serbian Orthodox Patriarch Irinej.

The official program, released by the office of the president, specified that Chepurin would host a concert of spiritual music in the southern town of Niš on January 17.

Religious analyst Živica Tucić commented on the news by telling the Beta news agency that “Russia has nothing to do with the Edict of Milan”.

Previously, the Serbian media reported that Russian Orthodox Patriarch Kirill did not wish to meet with the Roman Catholic Pope Benedict XVI for the first time in Niš, where the anniversary of the Edict of Milan will be marked this year.

The Russian Church reportedly “demanded that only the heads of Orthodox churches, and not the pope, be invited to the event”.

The Edict of Milan was brought by Rome’s first Christian emperor, Constantine the Great, who was born in Niš (Naissus).

The law declared equality of religions and marked the end of persecution of Christians that had been ongoing in the Roman Empire for the previous 313 years.