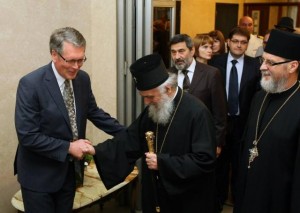 BELGRADE — The relations between Serbia and Russia are at a very high level and they continue to follow an upward trend, officials of the two countries have stated.

They attended a reception in the Russian embassy on the occasion of Russia Day on Wednesday evening.

Russian Ambassador to Serbia Aleksandr Chepurin said at the opening of the ceremonial reception that Russia is on a constant rise, and on this path it is constantly trying to strengthen its cooperation with the brotherly Serbian people.

Noting that Russia has a 1,150 year-long history, Chepurin said that the two countries have similar pasts through which the names of their countries constantly changed, while the name of the peoples remained the same.

The Russian ambassador stated with regret that Serbian President Tomislav Nikolić, Prime Minister Ivica Dačić and First Deputy Prime Minister and Defense Minister Aleksandar Vučić, could not attend the reception, which brought together around 2,000 people.

Nikolić, who is in Slovakia, and Dačić addressed the guests via video link, and congratulated Russia Day to all citizens of the Russian Federation.

Nikolić said that the relations between the two countries are at a very high level.

“If it were up to the peoples, we would be even closer and our cooperation and ties would be even better. All for the benefit of our peoples,” the president said.

Nikolić noted that recently he and Russian President Vladimir Putin signed an agreement on strategic partnership, whose benefits are yet to become visible to the citizens of the two countries.

Dačić stated that at the moment Serbia and Russia have one of the highest levels of cooperation in their history.

He expressed Serbia’s firm commitment to continue to develop political, economic and all other kinds of cooperation with Russia.

Serbian Parliament Speaker Nebojsa Stefanovic said that he is certain that the strategic partnership, traditional friendship and understanding between the two peoples will continue to develop.

“The history of our peoples is as long as the entire history of Russia and Serbia. We have always been inextricably linked and turned to one another,” Stefanovic said.

Serbian Orthodox Patriarch Irinej said that Russia offered support to the Serbian people both in the past and today, pointing to the brotherly tie between the two peoples throughout history.