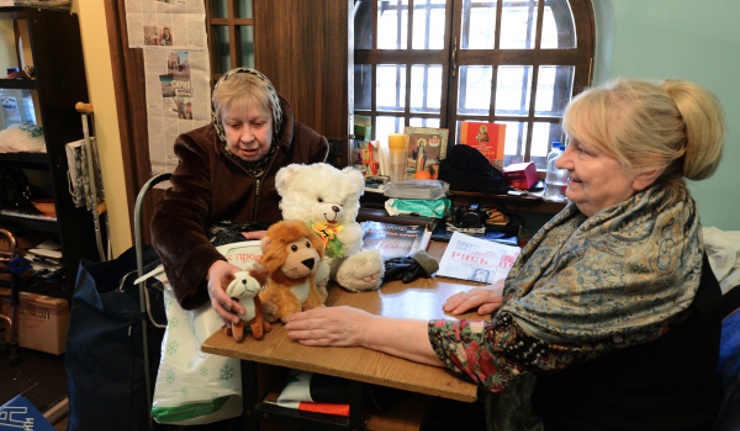 Ordinary Russians are largely opposed to any military action in Syria. But that doesn’t mean they’re indifferent to the plight of people there. Parishioners up and down the country have been collecting money to send to troubled Syrians. In the past few months Russian churchgoers have sent $1.3 million to Syria.

They’ve dispatched the money to a Greek Orthodox church in Damascus, which will buy Syrians basic goods like food, clothes, and mattresses.

The collection started when Patriarch Kirill, the head of the Orthodox Church in Russia, called upon Russian Christians to donate cash in June.

Since then Russians in churches as far away as Vladivostok and Murmansk have given money to be sent to Syria.

Vasily Rulinsky is from the Orthodox church’s charitable projects department in Moscow.

“It all started when a message from the Patriarch Kirill was read out in all the Orthodox churches in Russia. It was read out on 25 June, 2013. And in this message the Patriarch described the situation in Syria, described the needs of the people and called for anyone who is not indifferent to the suffering of our brothers to donate in order to help our brothers in Syria and other countries of the Middle East where they are forced at the moment to live as refugees.

“There is a need for humanitarian aid – food, items for basic hygiene, and everything that is needed on the ground. The representatives of the [Greek Orthodox] Church of Antioch [in Damascus] have asked us to send help in the form of financial transfer because it is very difficult to send humanitarian aid from Russia to Syria, as there are all sorts of bureaucratic and customs issues. So it was decided to send money.”

Vasily Rulinsky says that Russians have been deeply moved by the conflict in Syria.

“People were saying that they were ready to donate even before the Patriarch’s message. Indeed, many hearts were touched by the tragedy of the Syrian people.

“There are many people in Russia who are not indifferent to the tragedies in other countries and their people.

One of the priests collecting donations is Father Alexander Diaghilev whose church is just outside St Petersburg.

Father Alexander turned to the Bible to explain to his parishioners why they should help the Syrians.

“I gave people the same reason now: probably you don’t know these people in Syria, but these are our brothers and sisters who are suffering.”

Father Alexander says that Russia’s recent experiences of war mean that its people are acutely familiar with the suffering of those living through conflict.

“We have passed through great persecutions and World War II not so many years ago, so many of us remember what that is, or our parents remember how it was. And so we have to help those people who are suffering nowadays.”

He has collected for other causes abroad before, such as the Fukushima nuclear accident in 2011.

“Some people at that time came to me and said, we have too many problems in Russia, why should we collect money for Japan, which is not such a poor country?

“I explained that maybe Japan will survive, and they will find money to restore everything, but people need help right now. That’s why we need to support them right now. Later, the government will maybe organise something, and so on.

“There’s the same situation now with Syria, but now people are already now that it’s usual for me to suggest they take part in donating [money].”

Father Alexander and Vasily Rulinsky say it’s possible that they will ask Russian churchgoers to donate to a further appeal for Syria in the future.

Most viewed articles
Dining with Caesar166
What Does Asceticism Look Like?120
Orthodox Chapel to Be Constructed in Campina das Missoes61
Ukrainian Church Calls for De-Escalation of the Conflict in Donbass54
Archbishop of Australia Attends Commemorative Events for Battle of Crete in Melbourne48
Be Bearers of Light41
Most popular authors
Archpriest Lawrence Farley166
Pravmir.com team162
Archpriest Michael Gillis120
Metropolitan George (Khodr) of Mount Lebanon41
Maria Trushanina1