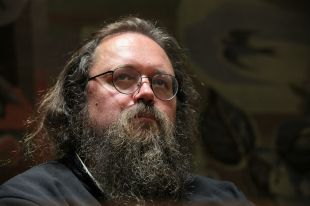 Moscow, December 31, Interfax – The Moscow Theological Academy has fired one of its professors, high-profile theologian, philosopher and missionary Protodeacon Andrey Kurayev, for “scandalous and provocative” statements on his popular blog and in the media.

“The [academy’s] academic board has recorded that Protodeacon Andrey Kurayev regularly posts provocative items in the mass media and blogosphere, and that his activities in those areas remain scandalous and provocative,” the academy said in a statement.

The board decided to “dismiss Protodeacon Andrey Kurayev as a lecturer and expel him from the professorial staff of the Moscow Theological Academy, taking account of the fact that his professorial rank was conferred on him at another institution of higher education,” the statement said.

In explaining Kurayev’s dismissal, the board claimed that the protodeacon had disregarded a board resolution of March 12, 2012, that pointed out that “professorship at the Moscow Theological Academy carried high responsibility for the form and content of one’s public statements as those lay the basis for judgments both about this educational institution itself and about the Church as a whole.”

Kurayev’s dismissal “can in no way be considered to be unexpected,” said Archpriest Maxim Kozlov, one of the top figures at the academy.

“As, indeed, [the academic board’s resolution] itself states, as far back as in March 2012 colleagues approached Father Andrey Kurayev with a brotherly request not to expose the reputation of a professor of a Moscow theological school to risks that would eventually affect not only the father protodeacon himself but the entire educational institution, one of the oldest in the Russian Orthodox Church, which he represented,” Father Maxim told Interfax-Religion on Tuesday.

Since March last year, Father Andrey “has not only failed to wrap up his activities” as an independent blogger and a permanent media commentator on issues he himself chooses to comment on “but has stepped them up,” the priest said.

“Quite often, the style and character of his statements has been a far cry not only from our academic, university style but also from the way that, in the view of our corporation of lecturers, an Orthodox cleric can in principle afford to express himself,” he said.

Protodeacon’s dismissal was a reaction “not so much to any news as to former information activities with the participation of Father Andrey” because the academy’s entire staff “involuntarily became co-authors of Father Andrey’s unacceptable statements in the media,” the priest said.

The academic board should not be seen as a body involved in “inquisition-style trials,” he said.