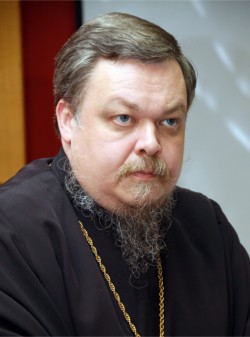 Moscow, November 27, Interfax – There is a need for an open and broad public debate on the proposal to reflect in the Constitution the special role of Orthodox faith, Archpriest Vsevolod Chaplin, the head of the Synodal Department for Church and Society Relations, said.

“Such initiatives, like any public, ideological, and legislative initiatives, can and should be discussed freely. It is strange that people who expressed so much support for the draft religious Code proposed by Mr. Prokhorov, which in my opinion is debatable, literally begged the authors of this initiative to be silent,” Father Vsevolod told Interfax-Religion.

“Any proposals should be discussed. They should influence public opinion. We need to know how our people really feel about them, not just how narrow expert or political groups feel about them,” he said.

According to earlier reports, representatives of the public organization Romanov Anniversary, the Russian Institute of Strategic Research, ad the Department of Constitutional Law of the Moscow State University of International Relations (MGIMO) earlier signed an address calling for the special role of Orthodox faith to be stated in the Russian Constitution. The document was backed by participants in the interfaction parliamentary group in defense of Christian values recently held in the State Duma. They spoke for including in the preamble of the Constitution the idea that Orthodox faith is “the foundation of the national and cultural identity of Russia.”

The priest admitted that this initiative will have many opponents and that the prospects of legislation being immediately passed on it “are far from being obvious.” However, he said he believes it is good that it has caused “important debate.”

Fr. Vsevolod said that, with all his respect for people with different religious affiliations, “it is obvious that an atheist, pagan, non-Orthodox Russia cannot be called Russia.”

“It is Orthodox faith and the Russian people who took it together with other peoples who took it that formed Russian consciousness, the Russian model of society, the Russian ideal in public administration, economics, culture, morals, education – in all aspects of our life,” he said.