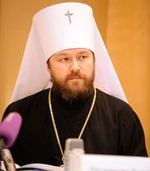 The Moscow Patriarchate is concerned that the administration of the European Union has taken an ultra-liberal stance on moral issues.

“Unfortunately, the administration of the European Union has recently taken anti-church and anti-Christian positions on some issues,” Metropolitan Hilarion of Volokolamsk, head of the Moscow Patriarchate Department for External Church Relations, told a briefing in Moscow on Friday.

As an example, Metropolitan Hilarion mentioned the processes taking place in the UK and France, “where laws making same-sex unions equal to traditional marriage are being passed despite mass protests.”

“These processes alarm us very much. The EU administration is forcing anti-Christian norms on all EU countries. Some countries manage to repel these attacks, and some can’t,” he said.

Metropolitan Hilarion believes the conflict of ideologies “which is now present in the EU countries and which was caused by artificial forcing of some anti-Christian norms on the entire population of the EU will resonate in different countries in various forms.”