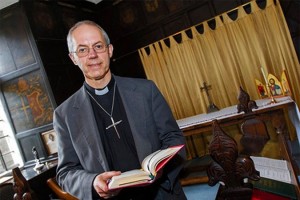 The Moscow Patriarchate expects Justin Welby, the new Archbishop of Canterbury, to adhere to the norms of Christian morals and the church system.

“We know that the Anglican Church is now going through a difficult time and various views, positions, and parties co-exist in it. However, we really hope that the traditional understanding of Christian morals and the church system will prevail in this polemic,” Metropolitan Hilarion of Volokolamsk, the head of the Synodal Department for External Church Relations, said during a meeting between Welby and representatives of the Orthodox Churches who attended his enthronement.

The introduction of the institution of female bishops will lead to the elimination of even a theoretical possibility of the Moscow Patriarchate recognizing the church hierarchy of the Anglican Church, the communications service of the Department for External Church Relations reported on Saturday.

“I would like you to know about that and take our opinion into account when this issue arises again,” Metropolitan Hilarion said.

Metropolitan Hilarion also said he is hoping Justin Welby will firmly defend the traditional biblical understanding of marriage as a union between a man and a woman “to prevent secular society from forcing on the Church of England the recognition of some forms of cohabitation which were never considered marriage by Christian churches.”

Welby responded by saying he appreciates the comment, adding that the position of the Church of England on the issue of marriage is absolutely clear and it has recently confirmed that marriage is a life-long union between a man and a woman.