Russian Church official urges to reconsider the concept of tolerance 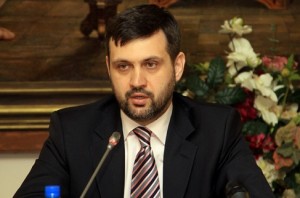 Valday, September 19, Interfax – It is important for religious leaders to leave general phrases and stand for traditional values, the Moscow Patriarchate official said.

“It places us before the challenge of reevaluating idiologems that have already become usual, but do not work. Not least, it refers to the concept of tolerance that certainly needs to be reconsidered,” Vladimir Legoyda, the head of the Synodal Information Department, said at Valday-2013 International Forum.

He reminded that Christian world outlook, according to Krzysztof Zanussi’s words, refers to tolerance without love as “indifference.”

“Points of tensions will go and go not between various religious traditions but rather between religious and not religious, aggressive secular world, world of consumption that today more and more often contradicts to the things that are dear for a religious person,” Legoyda stressed.

“Unfortunately, we do not say, do not clear out in the media space the difference between religion and religious motivation. People, who are usually characterized as religious extremists, are religiously motivated people. But religious motivations of these people can result in actions that do not correspond to values of their religion. It is a fundamental position,” he summed up.