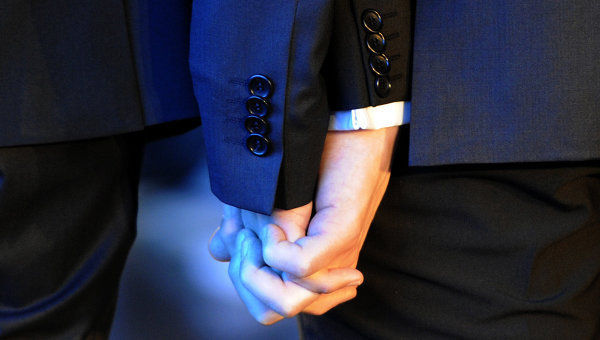 MOSCOW, September 5 (RIA Novosti) – A bill that proposes stripping gays with children of their parental rights was introduced in the lower house of the Russian parliament by a lawmaker from the ruling party on Thursday.

The bill is a follow-up to legislation introduced in June that bans propagation of “gay propaganda among minors,” according to the document’s text, available on the State Duma’s website.

“Harm that could be inflicted on a child’s mental health in case of their parent’s homosexual contacts is immense,” the bill’s author, United Russia party member Andrei Zhuravlyov, said in a note accompanying the document.

The bill cited a controversial 2012 study by US sociologist Mark Regnerus as proof that gay parenting distorts a child’s sexual orientation and increases suicidal tendencies, social ineptitude and risks of catching venereal disease.

The study by Regnerus, an associate professor at the University of Austin and a practicing Christian, has sparked vehement debate in the sociological community and was formally condemned by the American Sociological Association as invalid earlier this year. Zhuravlyov’s note makes no mention of the controversy, but claim Regnerus’ findings were corroborated by unspecified independent experts.

No timeframe for the bill’s review was given as of Thursday. The Duma will hold its first session after the summer recess next Monday.

The idea of stripping LGBT parents of their rights was first aired in June by ultraconservative Duma lawmaker Yelena Mizulina, an ardent backer of the ban on “gay propaganda.”

Mizulina’s proposal prompted one of Russia’s most prominent gay rights champions, liberal journalist Masha Gessen, to leave Russia for the United States. Gessen said she feared the two children she was raising with her girlfriend could be taken away from her.

“As a gay parent I must flee Russia or lose my children,” Gessen, who holds dual Russian-American citizenship, said in an op-ed in The Guardian newspaper last month.

Between 5 and 7 percent of the Russian population are gay, a third of whom have children, Zhuravlyov’s bill claimed, citing unspecified experts. If true, the figures implies that between 2.3 million and 3.3 million Russians face possibly losing their children if the bill is passed.