The 100-million-euro project won by French construction group Bouygues finally got off the ground after being sent back to the drawing board several times over the past three years. 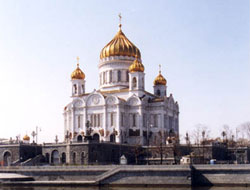 Russia has begun building what is likely to be one of its most high-profile Orthodox churches abroad on the banks of the River Seine in Paris, near the Eiffel Tower.

The Russian state bought it for the Church in a deal that was agreed in 2010 by then presidents Nicolas Sarkozy and Dmitry Medvedev.