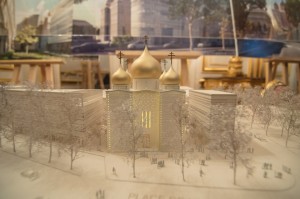 Jan 17 (Reuters) – Russia has begun building what is likely to be one of its most high-profile Orthodox churches abroad on thebanks of the River Seine in Paris, near the Eiffel Tower.

The Russian state bought it for the Church in a deal that was agreed in 2010 by then presidents Nicolas Sarkozy and Dmitry Medvedev. (Additional reporting by Tom Heneghan; Editing by Susan Fenton)