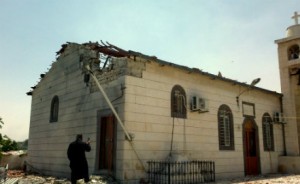 MOSCOW, August 5 (Itar-Tass) – Representatives of the Imperial Orthodox Palestine Society and the Russian Orthodox Church have carried medical equipment at the amount of about three million rubles to Damascus, said Hieromonk Efrem, acting representative of the Patriarch of Moscow and All Russia for the Patriarch of Antioch.

“Hospitals asked us for this. We also visited a military hospital and children’s clinic in Damascus to learn what they need,” Hieromonk Efrem said.

In addition, the Russian delegation visited the humanitarian aid centre of the Antioch Orthodox Church where two batches of medications had been delivered within two weeks. “Every day they assist to 800 refugees and help everyone regardless their confession. Unfortunately, the fire forced us to leave the centre immediately,” Hieromonk Efrem said.

At the end of June Patriarch Kirill urged Russians to assist to their brothers in Syria. “We cannot stop the war. But we’ll be able to pray for it to cease as soon as possible and assist to our Christian brothers… I ask you to follow Christ’s example and help our brothers,” Patriarch Kirill said in relation to the tragic events in Syria.

As of today 7.155 million rubles have been collected to be given to the Antioch Patriarchate.