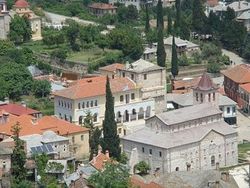 A delegation of the Russian Orthodox Church, which arrived in the Holy Mount Athos to take part in the celebration of the patronal feast of the Monastery of St. Panteleimon, made a pilgrimage to the Athonite monasteries and visited its administrative centre.

On 10 August 2013, the guests from Russian arrived in Karyes, the capital of Athos, and met with the members of the Holy Administration led by its protos for this year, hieromonk Stephen from the Serbian monastery of Hilandari.

Metropolitan Rostislav of Tomsk and Asino, head of the Russian delegation, thanked the monks for hospitality accorded to the pilgrims and said that their prayers were spiritual mainstay for the Orthodox Christians all round the world.

Hieromonk Stephen mentioned the recent visit of His Holiness Patriarch Kirill of Moscow and All Russia to Mount Athos and noted its importance for the Holy Mountain and for relations with the countries of historical Rus’.

The guests venerated the miraculous icon of the Mother of God called “It is Truly Meet”, which is considered to be a patronal icon of Athos.

The Russian pilgrims also visited the monastery Agios Pavlos, the Iviron monastery, where they sang Akathistos to the Mother of God, the Philotheou monastery where they venerated the right hand of St. John Chrysostom, the Stavronikitas monastery, and the Vatopedi monastery, where they prayed during evening service and were received by archimandrite Ephraim, the hegumen. During the talk they discussed many problems of religious life and pastoral ministry in the contemporary world. Hegumen Ephraim noted special spiritual ties between Russia and Mount Athos and sent his greetings to His Holiness Patriarch Kirill whose recent visit, he said, was a very meaningful event for the Athonite monks, who will cherish the memory of it.

In the cathedral the Russian pilgrims venerated the greatest shrines: a particle of the Life-Giving Cross of the Lord, the sash of the Theotokos which was brought to Russia last year, the precious heads of Ss Gregory the Theologian, John Chrysostom and Eudokimos of Vatopedi, and also a miraculous icon of the Theotokos called the “All-Reigning.”