All religions in Azerbaijan are equal, and this is confirmed not only by documents, but also by actions, Bishop of Baku and Azerbaijan Alexander (Alexander Ishein) said on Saturday at the awarding ceremony with the Dostlug (Friendship) Order organized at the State Committee for Work with Religious Organizations.
admin | 23 June 2012 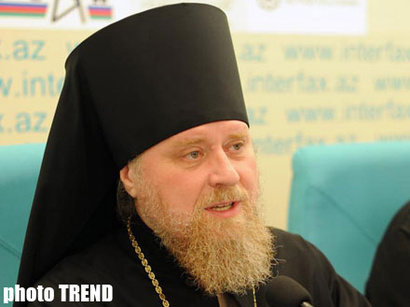 All religions in Azerbaijan are equal, and this is confirmed not only by documents, but also by actions, Bishop of Baku and Azerbaijan Alexander (Alexander Ishein) said on Saturday at the awarding ceremony with the Dostlug (Friendship) Order organized at the State Committee for Work with Religious Organizations.

“Compared with other countries there are no conflicts on religious grounds in Azerbaijan, for which the country is grateful to the President,” Alexander said.

He expressed satisfaction that President of Azerbaijan Ilham Aliyev has honored him with this award.

Chairman of the State Committee for Work with Religious Organizations Elshan Isgenderov gave Ishein the Dostlug order, which he was awarded by the Order of President of Azerbaijan Ilham Aliyev.

Speaking at the event, Isgenderov stressed that representatives of the Russian people living in Azerbaijan are citizens of the country and that they have shown a special selflessness in battles, defending the territorial integrity of Azerbaijan.

By order of the President for services in the development of ties between the peoples of Azerbaijan and Russia, Alexander Ishein was awarded the Dostlug Order.