Russian Orthodox Church to get its own instant messaging service

Source: RBTH Network
An estimated 7-10 million potential users in Russia stand to benefit from the project, which will allow them to keep in constant contact with each other and the Church.
Yekaterina Trifonova | 30 July 2016
Russian Orthodox Church to get its own instant messaging service 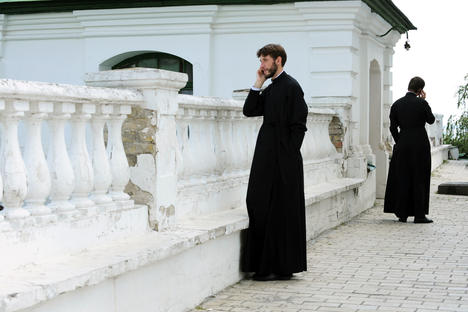 They already have a special social network devoted to them, but now members of Russia’s Orthodox community will also be able to communicate with each other via instant messages.

The founders of the Elitsy Orthodox social network, who announced the news on July 27, believe that worshipers need a system that will allow them to constantly keep in touch with the Church. The service, with an estimated 7-10 million potential users, should be launched as soon as fall 2016.

“The messaging service, as well as the social network, is a part of the single communication platform of the Russian Orthodox Church,” Ivan Suslin, the director for development of the Elitsy Orthodox social network, explained to RBTH.

“Some priests will have broader rights: They will be able to quickly send information to users. For example, the church’s rector will be able to send news to all the worshipers registered, the same holds true for eparchies and the patriarch,” said Suslin.

Vahtang Kipshidze, deputy chairman of the Synodal department of the Orthodox Church’s public and media relations department, was keen to emphasize in conversation with RBTH that the messaging service is a private project, although it is supported by the Church.

“We see the idea to create a messaging service as a natural stage in the development of the Elitsy Orthodox social network and believe it will broaden the communication possibilities for its users,” he said, adding that the Russian Orthodox Church sees Elitsy as “an interesting project that provides many worshipers with a space for intra- and inter-community communication.”

The Elitsy Orthodox social network went online in May 2014 with Russian Patriarch Kirill’s blessing. The organizers state that the aim of the project is to unite Orthodox believers and develop and strengthen the life of a parish.

The network helps worshipers to learn more about each other and make the organization of the Church’s life (organizing events, the exchange of news, etc.) easier for priests. Today about 17,000 parishes and more than 100,000 users are registered in it, including about 1,000 priests.