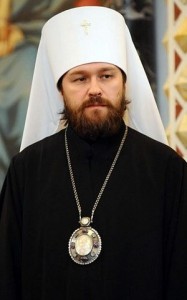 Astana, February 21, Interfax – The Russian Orthodox Church is hoping that the successor of Benedict XVI will continue his policies, said the head of the Department for External Church Relations Metropolitan Hilarion of Volokolamsk.

“As to our attitude to Pope Benedict XVI, who is now retiring, our attitude is generally positive because the dynamics of the development of relations between the Orthodox and Catholic Churches was positive in the course of the time when he was pontiff,” he told a press conference in Astana.

“Pope Benedict XVI is a person who protects the interests of his Church and who is a traditionalist in the best sense of this word, that is, who puts the preservation of church traditions much higher than, for example, popularity in the mass media,” Metropolitan Hilarion said.

He believes Benedict XVI was not very popular with the press, unlike his predecessor John Paul II, but “Benedict XVI was very positively perceived both in the Catholic Church and in the Orthodox Church.”

“We value this traditionalism in him and we are hoping that his successor will continue the policy of protecting the traditional Christian theological and moral doctrines,” he said.

“In Western countries, marriage is perceived primarily as contractual relations between a man and a woman, and in some cases it could be contractual relations between two men or two women, and more and more countries are legalizing such relationships, such unions. Of course, in this situation, when the Catholic Church insists on the traditional understanding of family, family values, and the unacceptability of abortion, it becomes unpopular and is heavily criticized. Nevertheless, it continues defending these moral traditions, on which the life of human society has been based for centuries,” he said.

“The position of the Orthodox Church is the same, and we, in this sense, see the Catholic Church as our ally and are hoping that this union will develop under the new pontiff,” Metropolitan Hilarion said.