Russian Orthodox Church: Reconciliation Message for Russians and Poles will not Have Political Content 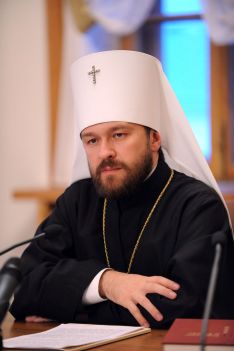 The Russian patriarch’s upcoming visit to Poland will hopefully help improve relations between Russians and Poles, the Moscow Patriarchate said.

“It is our deep conviction that relations between the Polish and Russian people, marred many times by hatred, wars and enmity over history, can and must be improved. It is not a demand, dictated by the political situation, but a present-day challenge,” Metropolitan Hilarion of Volokolamsk, the head of the Moscow Patriarchate’s Department for External Church Relations, said in an interview with Interfax.

Now that Europe’s Christian legacy is being revised, “when the traditional values are being cast into doubt by adepts of political correctness and belligerent secularism,” Christians are compelled to join hands in defending their idea of good and justice,” he said.

Patriarch Kirill and the head of the Polish Roman Catholic Church, Archbishop Josef Michalik, are expected to sign an agreement on Russian Polish reconciliation.

“The agreement is devoid of political content and is based on the Christian understanding of sin and mercy, the disregard of which will make reconciliation between our people an empty declaration. We will appeal to the people of Russia and Poland, who understand that the search for who is right and who is wrong, as well as pride and haughtiness go against the Christian conscience,” Metropolitan Hilarion said.

Calling for friendship and fraternal love between Russians and Poles, the Russian Orthodox and Polish Roman Catholic churches believe that, “reconciliation is only possible if it rests on sincere faith and God’s help which illuminates every good initiative,” he said.

“Russians and Poles have a centuries-old common history. We are members of the same Slavic family, we are neighbors and we profess Christianity. Our relations have not always been making headway, and we have known hard and dramatic moments. Unfortunately, these very moments dominate in our historical memory, becoming a subject of special meaning for certain public forces and journalists,” he said.

This trend is erroneous, Metropolitan Hilarion said. “As members of one family, as Christians we must find common ground and keep our hearts open to each other,” he said.

Patriarch Kirill of Moscow and All Russia will be in Poland on August 16 to 19 in the first visit to be paid by a head of the Russian Orthodox Church.

The Moscow Patriarchate’s spokesman deacon Alexander Volkov earlier told Interfax that Patriarch Kirill and Metropolitan Josef Michalik will sign a joint message to the Russian and Polish people and urge them to consolidate fraternal relations.