Russian Orthodox Church to give $1 mn to Syrian residents 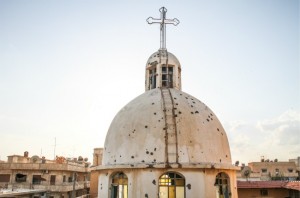 Moscow: The Russian Orthodox Church is preparing to give over 1.3 million US dollars to residents of Syrian cities, spokesman of the Synodal Department for Church Charity and Social Ministry Vasily Rulinsky said.

In an interview with Izvestiya newspaper, Rulinsky said, “The Antioch Church’s Department for External Church Relations and Development helps. Clothes, mattresses, foodstuff and hygienic essentials are being given to those in need. Thus, our assistance will be very important.”

“At the end of June Patriarch Kirill of Moscow and All Russia urged believers to help those who fall victims of the armed conflict in Syria. Funds, which were collected by the Russian Orthodox Church eparchies, are being sent to the accounts of the Synodal Department for Church Charity and Social Ministry. Then the funds will be handed over to Patriarch John X of Antioch and All the East, as well as to Supreme Mufti Ahmad Badreddin Hassoun of Syria.

The Izvestiya wrote that from July 2012 over 5,000 people have died in Syria. For two years of the armed conflict at least 93,000 people were killed.

The head of the Independent International Commission of Inquiry on the Syrian Arab Republic said the Syrian conflict had caused USD 60-80 billion damage. (Itar-Tass)