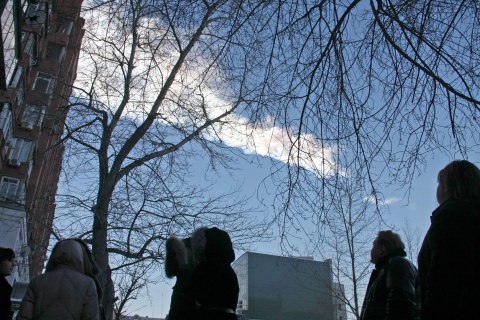 Locals look skywards as the vapour trail of a falling meteorite passes over the city – before crash landing – of Chelyabinsk, Urals, Russia 15 February 2013. EPA/BGNES

The meteorite which injured hundreds of people in Russia’s Chelyabinsk Region on Friday was “the Lord’s message to humanity,” according to Metropolitan of Chelyabinsk and Zlatoust Feofan

“From the Scriptures, we know that the Lord often sends people signs and warnings via natural forces,” the Metropolitan declared.

“I think that not only for the Ural [regions] residents, but for the whole of humanity, the meteorite is a reminder that we live in fragile and unpredictable world,” the clergyman said, as cited by RIA Novosti.

He called on the people to support each other and pray to God in thanks for saving the world from a devastating disaster.

Hundreds of people have sought medical aid after the meteorite hit Russia early on Friday. Thousands of buildings were affected by shock waves from the meteorite as it passed through the atmosphere at supersonic speed.

Many local residents will have to patch up their broken windows, with temperatures likely to drop as low as 17 degrees Celsius (1.4 Fahrenheit) in the region overnight.