JERUSALEM — Russian Orthodox Patriarch Kirill called on Sunday for closer cooperation between religions at meetings with Israel’s chief rabbis in Jerusalem, on the third day of a historic Holy Land visit. 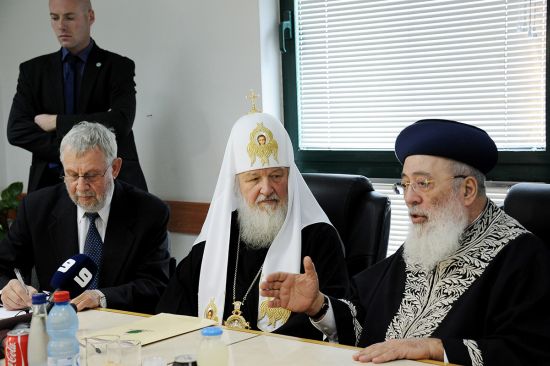 “In our times, when people are giving up faith and tradition, there is special significance to good ties between representatives of different faiths,” he told Israel’s Sephardi Chief Rabbi Shlomo Amar.

“Today, when so many people think that the main thing in life is to be free and give up belief, it is all the more important to retain moral values,” he said in simultaneously translated remarks.

The head of a community of some 150 million Orthodox believers arrived in Jerusalem on Friday for his first visit since becoming head of the powerful church in 2009.

In talks with the Ashkenazis’ Chief Rabbi Yona Metzger, Kirill said that “the situation in Africa and the Middle East necessitates religious dialogue.”

Metzger also presented Kirill with the draft of a document containing the fundamentals of religious dialogue.

A statement from the president’s office said Peres expressed his respect to members of Kirill’s religion living in Israel.

“They are good citizens,” he told the patriarch. “Whatever we can do to ease their lives and religious faith, we will.”

More than a million Soviet Union expatriates immigrated to Israel in the 1990s, of them a quarter believed to be Christian.

Israel and east Jerusalem are currently home to some 120,000 Arab Christians, the vast majority of them Greek Orthodox, according to Israeli statistics.

In addition there are up to 250,000 Russian Orthodox living in Israel, according to different unofficial estimates.

Kirill thanked Peres for the warm reception he received in Israel, and said that “today joint relations have reached the highest point.”

Israel’s foreign ministry called his trip “the most important (religious) visit (to Israel) since that of Pope Benedict XVI” in 2009.

The 65-year-old patriarch will visit Christian holy sites in northern Israel as well as in Jordan, where he will also meet King Abdullah II.